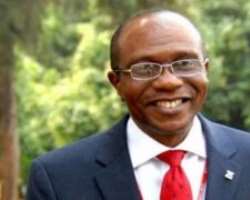 PresidentMuhammadu Buhari on Thursday announced the reappointment of Mr. Godwin Emefiele as the Governor, Central Bank of Nigeria (CBN.

The announcement came.via a letter by the Presidrnt to the Senate requesting for his confirmation as the governor for the second term.

By this development, Emefoele becomes the first governor of the apex bank to serve a second term since Nigeria's return to democratic rule in 1999rs.

Buhari's letter to the upper chamber, dated May 8, 2019, was read by Senate President Bukola Saraki at the end of plenary yesterday.

Section 8 (1&2) of the CBN Act 2007 states that “The Governor and Deputy-Governors shall be persons of recognized financial experience and shall be appointed by the President subject to confirmation by the Senate on such terms and conditions as may be set out in their respective letters of appointment.

“The Governor and Deputy Governors shall be appointed in the first instance for a term of five years and shall each be eligible for re-appointment for another term not exceeding five years.”

The Lagos born.
According to a national nesspaper The Huardian, Emefiele's austere nature and ability to instill financial discipline in the banking sector, which significantly reduced rascality and frivolity in loan approvals, may have resonated with Buhari, whose body language cuts a similar posture.

The 57-year-old banker was the Group Managing Director of Zenith Bank Plc prior to his appointment in 2014, with a huge task to stabilise an economy that went awry since 2015.

Since mid-2014, when he took over the reins of CBN, Nigeria has experienced stable economic monetary policies, even as it did not witness any crude oil windfall, which is the backbone of the economy, in terms of revenue supply.