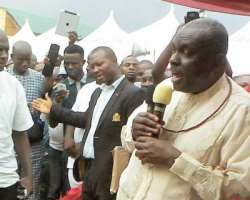 Leaders in Oghara, the hometown of former Gov. James Ibori has advised criminals and ritual killers to relocate from the kingdom or be ready to face the wrath of security agencies.

The warning was handed down after a strategic meeting held at the residence of Gov. James Ibori on Saturday night which lasted for over two hours.

The decision of the Oghara leaders at the meeting which was held behind closed doors was made known by Kparobo Ehvwubare who briefed journalists at the end of the meeting explained that haven deliberated extensively on the security situation in the kingdom, warned ritualists who go about killing people and removing parts of their body to desist forthwith or be ready to face the wrath of security agencies in the area.

Oghara leaders also among other things appealed to security agents in the area to be alive to their responsibility, praised Ethiopie West Council Chairman, Solomon Golley for vigorously fighting crime in the area.

Earlier, Oghara Leaders under the auspices of Oghara Advancement Foundation, OAF was at the residence of Gov. James Ibori to officially briefed him on the activities and successes of the foundation while he was away.

The Chairman of Oghara Advancement Foundation, Chief Emmanuel Ighomena informed Chief Ibori that following challenges that confronted the kingdom while he was away, the traditional ruler of Oghara kingdom, Orefe 111 set up six member committee to find lasting solution to some of the challenges bedevilling the kingdom.

Chief Ighomena also told the former governor that in a bid to find solution to some of the challenges facing the kingdom, the committee organised a summit tagged "Oghara summit 2016" that brought together Oghara people both at home and abroad, which was held in Asaba, noted that at the end of the summit, resolutions were made, some of them has been achieved while others are still on the pipeline; averted that after the summit, the traditional ruler of Oghara kingdom, Orefe 111 inaugurated a twenty member committee to drive OAF agenda.

He however informed Ibori that during the constitution of the committee, he was made the Grand patron of the group.

While responding, Chief Ibori thanked the body for a job well done while he was away, promised contribute his quota towards the advancement of Oghara, urged all and sundry to also contribute their little quota as he cannot do it alone.