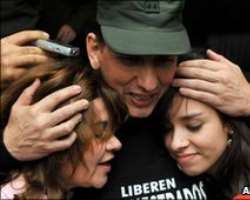 Informants who aided the rescue of four members of the Colombian security forces from rebels will share a $1.2m (£800,000) reward, the army has said.

The three police officers and a soldier had been held captive by the Farc guerrillas for almost a decade.

They were rescued on Sunday in an army raid on a rebel camp in the jungle in southern Colombia.

The army did not say how many informants were involved, but said one was a rebel deserter.

valuable assistance
The head of the army, General Oscar Gonzalez, said information from a number of sources had led the army to the exact location where the captives were being held.

“We knew exactly where we were going, how the security was set up, and how many terrorists were guarding the hostages”, he said.

He added that the army would do its utmost to protect a former guerrilla who gave “valuable assistance” to the rescue effort.

Police officers Gen Luis Mendieta, Col Enrique Murillo and Lt Col William Donato, and army Sgt Arbey Delgado, were given a hero's welcome when they arrived in Bogota after almost a decade in captivity.

The rescue operation was the highest-profile mission since July 2008, when French-Colombian politician Ingrid Betancourt and three Americans were freed from rebel hands.

It came just days before the second round of Colombia's presidential election.

Former Defence Minister Juan Manuel Santos, who was credited with masterminding that operation, is favourite to win the 20 June second round of the presidential election, when he will face Green Party candidate Antanas Mockus.

It is believed the Revolutionary Armed Forces of Colombia (Farc) are still holding 19 members of the security forces whom they want to swap for some 500 jailed guerrillas.

Most of the hostages have been held for more than a decade.