Workers Are The Soul Of A Nation - Sylva 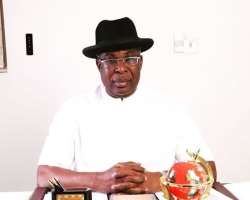 In a statement signed in Abuja by his Media Aide, Julius Bokoru, Sylva said the ‘growth of the Nation, like in every other nation on earth, is hinged on the relentless, passionate and patriotic actions of workers. The resolve and spirit of the Nigerian worker has remained well above the motivations our nation can afford, across decades’

Sylva also described workers as agents of humanity ‘The recurring theme when you see the manual day labourer under the sun, the factory hands with helmets, the civil servants and several other groups of workers is humanity and patriotism, the factors that drives the Nigerian worker.

On Bayelsa State, Sylva felicitated with Bayelsa workers and commended their faith in the state inspite of a government that has, for the past seven years, ‘under-utilized the depth of talents in the workforce and has delibrately, continually degraded their welfare’

Sylva sympathised with Bayelsa workers for the harsh, painful and intolerable condition which they have been subjected to since Dickson was imposed in 2012. ‘It has been seven years of lack of promotion, irregular payment of salaries, embargo on employment, sleazy employment schemes, non-payment of gratuities amongst others’