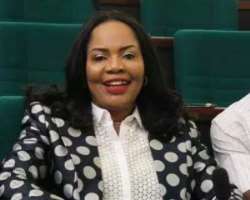 Arewa women and youth groups led by Movers and Shakers Organisation of Nigeria and Northern Emancipation Network, on Tuesday kicked against Hon. Femi Gbajabiamila's candidacy, describing Hon Nkiruka Onyejeocha as the right person for the position of 9th speaker of House of Representatives.

Their position was made known at a press conference, held at Holiday Conference facility in Kaduna.

Reading the endorsement document on behalf of other groups, President, Movers and Shakers Organisation of Nigeria, Ruqayya Sani, said South East was the best slot for the speaker of the house in line with federal character arrangement.

The groups, according to her, observed that, there were underground forces driving the controversies and fueling tensions, aimed at causing initial distrust among the NASS members, with the attendant risk of making the next four years of President Muhammadu Buhari strenuous, and setting the stage for the eventual breakup of the All Progressives Congress.

She said they were surprised that the leadership of the All Progressives Congress (APC) and President Muhammadu Buhari were failing to see the potential risk in the trap to get them to openly endorse the adoption of candidates drawn from particular zones to the exclusion of other zones of the federation with equal entitlement.

She said, “for the sake of fairness, justice and equity, we believe that the South-East is more eminently qualified for the slot of the Speaker of the House of Representatives in compliance with the nation's federal character principle. And in conformity with the global demand for affirmative action, we strongly recommend that a female member of the House should be given the position.

“In this regard, after due consideration and assessment of all possible candidates from the South East, we are convinced that Mrs. Nkiruka Onyejeocha, representing the Isuikwato/ Umunneochi Federal Constituency, of Abia State is by whatever criteria competent to take up that responsibility.

“We hereby declare support for Honourable Nkiruka Onyejeocha to be nominated and urge all independent-minded members to support and eventually elect her as the new House of Representatives Speaker in a transparent democratic process.

“We also commit ourselves to champion her course across the entire northern region and to reach out to other relevant stakeholders and like-minded groups and individuals across the country as we see Mrs Nkeiruka Onyejeocha as a symbol of hope for women, hope for the younger generation, hope for unity and hope for the future,” she added. (The Nation)