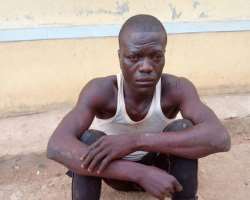 Men of Ogun state police command today arrested a 26-year-old man, Seun Adewole while attempting to snatch a motorcycle from the owner.

The Nigerian Voice gathered that arrest followed a distress call received from Adiyan community in Agbado area of the state that two armed men were about to snatch a motorcycle from owner.

On receiving the information, the DPO Agbado division CSP Omonijo Olatunji detailed his patrol team to the scene where one of the robbers was arrested while his accomplice escaped through the nearby bush.

The Police Public Relations Officer for the command, Abimbola Oyeyemi while conforming the incident said one locally made pistol, one dagger and assorted charms were recovered from the suspect.

The PPRO said "The suspect gave the name of his fleeing colleague as OJO IBERU."

"He equally confessed that they are members of Aye cult group and that they used to go into robbery whenever they run out of cash", Oyeyemi said.

The commissioner of police in the state, CP Bashir Makama ordered the immediate transfer of the suspect to special Anti robbery squad(SARS) for discreet investigation.