Hon. Anayo Edwin Nwonu: Service To Humanity As A Way Of Life 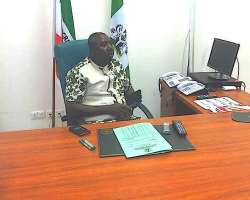 The difference between true leaders and fringe opportunists who masquerade as leaders is that true leaders build longer tables on which they share their meals and empower as many members of the society as possible to be self-reliant, while fringe opportunists who masquerade as leaders build high walls to fence themselves off from the people they claim to lead. For true leaders, leadership is simply a great call to service. Leadership opportunities are like shadows: they run from those who chase them, and chase those who run from them. While many have the heart to lead, oftentimes leadership opportunities come to those who are not cut out for leadership. It is only on rare occasions that leadership opportunities and the heart of leadership meet in one person. On such rare circumstances, the people have always continued to rejoice like the holy scriptures say. In Ebonyi State, one of the few young men in whom both the heart and opportunity of leadership meet is Rt. Hon. Anayo Edwin Nwonu (a.k.a. Anatex), dedicated Umahist who represents Ezza North/Ishielu federal constituency in the National Assembly, Abuja. As early as 2008, I saw the promises that young, humble and unassuming Nwonu (a.k.a. Anatex) held for his society. Because Anatex was already a successful business man at that time, I passed through difficulties to persuade him to join Ebonyi politics which he regarded as cumbersome and cloudy to specifically contest his federal constituency seat. A man of charity and enormous goodwill, Nwonu rode through his works of charity into Ebonyi politics in 2010 when he ran a very impressive campaign in the PDP primary election for Ezza North/Ishielu federal constituency. That he came second in the contest left no one in doubt that he had a date with destiny. In 2015, Anatex teemed with his mentor - Governor David Nweze Umahi - in the battle for the restoration of power to the ordinary Ebonyians which the 2015 general election was and won election into the Nigerian National Assembly on the platform of PDP to represent his people of Ezza North/Ishielu federal constituency. For Rt. Hon. Nwonu who has continued to top the chart since 2015 as "The Best Federal Legislator in Ebonyi State", service to humanity has become a way of life and a source of fulfillment. Currently rated as the most accessible federal legislator in Ebonyi State, Nwonu who has two bills and four motions to his credit sank a total of 43 verifiable water boreholes in the 27 council wards that make up his constituency; distributed fifteen cars and 80 motorcycles to his constituents; built modern bungalows for indigent widows; built roads and culverts for his constituents as well as electricity projects in four communities among other achievements. Rt. Hon. Anayo Nwonu does not just give his constituents pieces of fish, he also teaches them how to fish: He has secured choice federal opportunities for over forty verifiable youths; gave conditional grant schemes to 39 verifiable small and medium scale entrepreneurs to enable them expand their businesses; built an ultra-modern ICT centre in Imoha; gave educational support to 20 verifiable students in various higher institutions of learning; distributed various instructional materials and learning aids in his constituency and paid medical bills of hundreds of the less-privileged through his Free Medical and Hospital Amnesty Programmes among others. The list of Rt. Hon. Anayo Nwonu's projects which cannot be exhausted in a piece like this has been documented by his constituents in book form. It was in appreciation of Nwonu's effective representation that his constituents spread across political parties fiercely competed for which group that could give Anatex the highest number of votes in the 2019 general elections. Like Oliver Twist, the people of Ezza North/Ishielu Federal constituency who had tested Rt Hon. Nwonu's service-certred representation in his yet to be determined first tenure craved for more, and political divides did not matter to them. Nwonu came tops in the February 23, National Assembly elections during which he was elected for a well-deserved second tenure which will run from June, 2019 to June,2023. While Rt. Hon. Nwonu's colleagues who won additional terms of office in the just concluded National Assembly elections are ensconced in post-election frolics, Nwonu refused to rest. In the manner of his workaholic mentor and Governor of Ebonyi State, Chief David Nweze Umahi, Rt. Hon. Nwonu has continued, without a dull moment, in his voluntarily chosen vocation of service to humanity. For instance, on April 19 2019, Rt. Hon. Nwonu commissioned a road project he built and asphalted in Agba Ugama community of Ezzaegu Ward and commissioned a motorized borehole he sank at Ezillo Ward both in Ishielu Local Government Area. The following day, April 20, 2019, Nwonu in the manner of our saviour, Jesus Christ, took over the burdens of numerous 'medical prisoners' detained for months at the Federal Teaching Hospital, Abakaliki for their inability to offset their respective medical bills. Through his Free Medical and Hospital Amnesty Programmes, Rt. Hon. Anayo Edwin Nwonu paid off the medical bills off those less-privileged children, orphans, youths, women, widows and men which ran into several millions of naira; thereby setting them free and making the Easter celebration more meaningful to the direct beneficiaries and their families who virtually experienced Christ-like compassion through this unassuming representative of the people. In his speech, Rt. Hon. Nwonu said that he borrowed his Hospital Amnesty Programme from his mentor and Governor whom he said must not be left to tackle all the problems of Ebonyi citizens. Nwonu who praised God for the giving Governor Umahi to Ebonyi people added that this Easter's edition of his hospital amnesty programme was the third in the series. He equally donated cash gifts to the beneficiaries to enable them travel to their houses and celebrate the resurrection of Jesus Christ. The beneficiaries sang praises to God who used Rt. Hon. Nwonu to give them reprieve; and asked God to preserve and prosper their benefactor. One of the bungalows built for indigent widows

The smiles and tears of joy which Rt. Hon. Anayo Nwonu has continued to put on the lips and eyes of the ordinary citizens of his constituency and Ebonyi State at large have fully rewarded my humble efforts as the instrument which God used to cross him over from business to politics for the greater benefits of Ebonyi people. I will continue to thank God and to be proud of Rt. Hon. Nwonu for that great opportunity. It suffices that Rt. Hon. Anayo Nwonu's style of representation has firmly etched him in the hearts of his teeming constituents who have no regrets for investing their votes in this legislator of a rare breed; made Nwonu one of the fastest learning and most coveted proteges of Governor David Umahi in the present Ebonyi State; and set him on a trajectory of limitless possibilities which will continue to manifest in the course of time. Rt. Hon. Nwonu flanked by CMD of FETHA, Dr. Emeka Onwe-Ogah (in red cap) and the 3rd set of the beneficiaries of Nwonu's Hospital Amnesty programme.