Abakaliki Catholic Diocese: The Papacy And The Politics Of Retirements 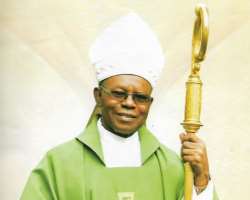 The Catholic Church which has been described as "the one true Church of God" is largely and correctly seen as the conscience of the society and the world at large. With scriptural and historical evidences about the foundation of the Catholic Church; the Pope as the head of the Church and the doctrine of infallibility weaved around the pontiff, it is natural for one to subscribe to the moral and ecclesiastic influence Abakaliki in 2015. Thereafter, both the pulpit and the pew of the said diocese as well as their friends and well-wishers looked forward to the appointment and ordainment of another bishop to oversee the Catholic diocese of Abakaliki; but for four years running, a new bishop has not been appointed for the diocese. This left the retired Bishop of Abakaliki still manning the diocese from retirement for four years running of the one true church of God. The Code of Canon Law is explicit on the fact that every Bishop on attaining the age of 75 must tender his resignation to the pope. The Catholic Bishop of Abakaliki, His Lordship, Most Rev. Dr. Michael Nnachi Okoro was born on 1st November, 1940 and attained the mandatory age of retirement on 1st November, 2015. This rare milestone of Most Rev. Dr. Okoro which coincided with His Lordship's 50 years in priesthood and 38 years in episcopacy was celebrated with pomp and pageantry by the faithful of the Catholic diocese of even when there are many priests in the diocese/province qualified for the bishopric.

While the aforesaid contradiction prevailed in the Catholic diocese of Abakaliki, the Archbishop of the Catholic Archdiocese of Abuja, Cardinal John Onaiyekan attained the mandatory retirement age of 75. Unlike the case in Abakaliki diocese, the pope quickly appointed His Lordship, Bishop Ignatius Kaigama, as the new archbishop of Abuja archdiocese to replace Cardinal Onaiyekan. The discordant handling of the similar retirements by the pope is brewing confusion among the faithful in the Catholic diocese of Abakaliki as both the pulpit and the pew could no longer understand what could be described as the politics of retirement being played by the revered father of the Church. All over the parishes in Abakaliki, one often bumps into muffled concerns of peace-loving parishioners who fear that a debacle similar to that of Ahiara diocese may be foisted on the Catholic diocese of Abakaliki. The canonical protocol for the appointment of bishops is one big maze culminating in the final decision of the infallible Bishop Michael Okoro
Pope. There is a strong suspicion that those who make the recommendations to the Pope may be bent on using the opportunity of the recommendation to settle scores in the silent but palpable dichotomy between indigenous and non-indigenous priests. Like we know, His holiness [the Pope] is infallible, but the communication chain between His holiness' office and the dioceses could be manipulated to make the Pope act sincerely and without fault on wrong or stage-managed information! This often happens where complexes exist. That was how the Ahiara impasse was created.