Imo State: The Heartland Of Killings As Parting Gift Of The Emperor (Photos embedded)

Imo State is pervaded By Peace Of Graveyards 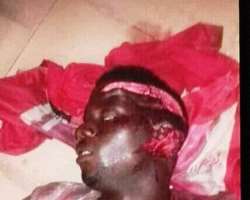 It is said that the evil that men do nowadays no longer just live after them, they live with them and after them. Those who live by swords shall die by swords. This can be found in the good book of life, the Holy Bible.

There is no doubt that News-Round in the discharge of its noble duties invested towards unravelling the danger in wait against the people for humanity sake. For we believe that journalism should stand on issues that border on humanity and development and communicate such effectively to the masses.

It is no longer news that pre-election and post election death toll in Imo State has risen to over 20, many others feared dead and there are no assurances in sight that this may be an end to these wanton bloodshed.

When Governor Rochas Okorocha told Imo people that he would use the last drop of his blood to ensure that his son-in-law, Mr. Uche Nwosu succeeds him, it was clear to few persons that he meant every word. Making real his threat, blood has continued to flow relentlessly in the state, but unfortunately so, because it is neither his blood nor that of his family members.

Okorocha, leading the pack, allegedly snuffed out lives from two youngsters but, quickly in defence, claimed they engaged security agents in gun battle. However, the people of the area cried foul, insisting those unfortunately killed by the bullets of Okorocha's killer agents were innocent. However, a certain newspaper reported that the boys had engaged the patroling military officers in a gun duel. This report has been severally rejected by the people of Ejemekwuru who simply gave the names of the late youngsters as Tochi and Ndukwe. They are also calling for justice by appealing to the Inspector General of Police to investigate what really led to the killing of the alleged innocent chaps.

Those who yielded to be instruments of destruction unfortunately are playing their games against themselves. It was revealed that a certain loyalist to Okorocha's son-in-law who was made a local government chairman of Owerri West local government area of the state, whose name is Chidi Ordu but popularly known as Madoka is allegedly the mastermind of what is being tagged as inter-cult clashes. The clash has taken not less than 17 lives.

The killing game is said to have continued despite the intervention of Nigerian Police, Imo State Command led by the Commissioner of Police, Mr. Dasuki Galadanchi, with many arrests already made.

According to one Emeka Amadi, an eye witness to some of the gruesome murders, said that it is unbelievable that life is no longer sacred in the state. His words: "What we are witnessing in the state is really strange. We have had skirmishes in the past where thuggery reined. It was nothing like we are witnessing now. This is not just usual clashes but organised killings where blood is spilled like sachet water. Okorocha should be held responsible because he was the one who hired them to kill Ndi Imo. Fortunately for us, God preserved us and put misunderstanding among them. It is simply karma at work. For us, it is rather unfortunate that we witness bloody tragic movie of murder in the day light and in public glare.The only thing that pervades our state is uncertainty. Not even the intervention of police has solved the problem."

The report has it that statements extracted from some of arrested cultists point to one person. They said no other person other than Okorocha, son-in-law, Uche Nwosu and their monstrous agent of death, Madoka. Madoka is said to be at large. He allegedly escaped having jumped his fence to evade arrest. He surely needs to come and give information over what he knows about the whole unfortunate incidents.

News Round has it in good authority that after conducting a search in his house, fire arms of various types were recovered by the Police special force team. Report also has it that Imo Police Command's dragnets have been spread within and outside the state to ensure that the masterminds of the unfortunate killing engagements are made to face the wrath of the law.

From our undercover correspondent, the ongoing bloody clashes being experienced may not be unconnected with sharing of the alleged booties of over N45 million from Okorocha's son-in-law, Uche Nwosu, among all the confraternities but Madoka allegedly chose to give only members of his group, Black Axe Confraternity, also known as the Neo-Black Movement of Africa. Okorocha's son-in-law is also said to be a member of this deadly Confraternity. Other confraternities are now after Nwosu's hitman, saying that they also delivered on the assignment they were commissioned to carry out during just concluded election.

Recently, Mr. Ordu has been buying spaces in the local tabloid for image laundry, distancing himself as the chief cause of the blood letting among confraternities. According to one of the students of Federal Polytechnic Nekede, Owerri West local government area of Imo State, who spoke on the condition of anonymity: "We are jittery hearing of the rumour that Madoka has been absolved of all his crimes. This means more troubles for us. Since these clashes began, we have all been frightened to the bone marrow as no one is sure who will be next. Stray bullets and false information could make anybody a victim. When they were sharing their money, most of us here did not care but now things have gone wrong, not even innocent students are free. I suggest that Madoka be arrested and quizzed to say all that he knows. We don't want to believe that money has exchanged hands."

Okorocha's son-in-law's nefarious activities came to limelight when Ifeanyi Ararume Jr., the son of All Progressives Grand Alliance (APGA) governorship candidate during a Radio call in programme in one of the frontline Radio stations, revealed one of Nwosu's secrets. Ararume had shocked the public by revealing that Nwosu was a drop-out, alleging that he was rusticated from school as as result of his involvement in cult activities. He had challenged Nwosu to produce his result and National Youth Service Corps discharge certificate, which Mr. Nwosu has not been able to counter till the time of this report.

Meanwhile, there was a serious clash between Special Anti-Robbery Squad and members of Black Axe Confraternity last two Fridays during the burial of one of the cultists by name Oscar Ebuka popularly known as 'Deceit'. Were it not for the timely intervention of SARS, intelligence report had it that the cultists loyal to Madoka had wanted to use the occasion to unleash mayhem on the people of Nekede community.

It will be recalled that Okorocha's estranged Deputy, Prince Eze Madumere on the eve of the general election had told the security agencies and the foreign election observers to hold Okorocha responsible should there be any reports of violence, saying that Okorocha would go to any length to perpetrate himself and son-in-law into power in desperation. True to his prediction, Independent National Electoral Commission Officers' freedom were defiled as they were abducted and some of them forced to go against their rule and will.

One of the celebrated cases that hit the world of Nigeria with disgust was the story of how Okorocha through his thugs, fake police among other groups and hoodlums literarily forced Prof. Innocent Ibeawuchi to declare him the winner of Imo West Senatorial election under duress. Unfortunately for him, the Professor in utter bravery made the pronouncement before cameras and other audio devices. Though INEC has vowed not to issue Certificate of Return to him,the world is however,watching to see if there are no extant laws to punish Okorocha, except he has become above the law.

There is palpable fear of imminent spread of violence against those who Okorocha felt had work hard to make him kiss the dust. Just received recently, one of the activist lawyer and politician, Uche Onyeagocha has raised alarm over the threat to his life with a reward of N30 million for whosever that will bring him down.

Only a week ago, the Deputy Governor got his own sad story as his aide, Mr. Alban Opara, a town Planner, escaped death by the whiskers. His Hilux van was snatched from him by 5 burly men and in his struggles with them, he was axed in the head. It was reported that Mr. Opara's life was saved because of the quick intervention of people when he raised alarm whilst under attack. Mr Opara confirmed to News Rounds, that save for God's grace,he would have been a goner. He dislosed that he was taking treatment in an undisclosed hospital.

It was further gathered that his assailants were allegedly sent from government house, because he was said to know too much about unlawful transactions of Okorocha led government in the area of land scam. This has also raised question of the safety of those who must have worked with Okorocha at one time or the other.

Reading a press release from the Office of the Deputy Governor signed by his Chief Press Secretary, it leaves no one in doubt that there is need for the security agencies to up their game to avert avoidable loss of lives and properties. The release reads:

"While there has been a harvest of deaths in Imo State occasioned by cult clashes that have left 13 persons dead, yesterday Deputy Governor of Imo State, Prince Eze Madumere’s aide on lands and a town Planner, Mr. Alban Opara, escaped abduction from suspected assassins."

There is need for disarmament because News Round had raised alarm about how Okorocha armed dangerous thugs and some militants to help him rig his son-in-law in as his successor. There is no surety that the arms in circulation would not be put to illegal use, including assassination plots. It is even more worrisome to note that some fake police uniforms are still in circulation. It will also be recalled that some of these fake police men were arrested by Imo police command led by Commissioner of Police, Dasuki Galadanchi.

It is true that Okorocha may have lost all but, like a snake, he may have only been scotched, he is now baring his fangs with even more dangerous venom. It follows that security agents should up their surveillance around Okorocha, especially at this time that he is battling with the trauma of election losses and what he may face regarding his stewardship after 8 years in office.