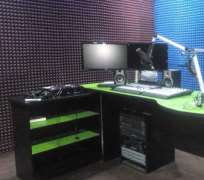 Abuja, Nigeria, March 12, 2019--Nigerian authorities should lift the ban on Jay FM radio station in the city of Jos in Plateau state and stop trying to intimidate its staff, the Committee to Protect Journalists said today.

On March 1, the Nigeria Broadcasting Commission (NBC) instructed the privately owned Jay FM radio station to shut down indefinitely for alleged violations of the Nigeria Broadcasting Code and National Broadcasting Commission Act, according to Jay FM staff that spoke to CPJ and an NBC order seen by CPJ. The shutdown order, which followed questioning of three Jay FM staff by the Department of State Security (DSS), claimed that continued "inciting broadcasts" would "lead to breakdown of law and order in the state."

On February 28, DSS agents entered Jay FM and arrested Orji Ojingwa, the station's head of engineering, because he was the most senior staff member present, Ojingwa told CPJ. "They drove in through the gate with two trucks filled with heavily armed officers and they took me away," Ojingwa said.

The DSS took Ojingwa to their office in Jos, questioned him about Jay FM programming, and released him after Mangna Yusuf, Jay FM's station manager, promised to submit himself to the DSS office the next morning at 10 a.m., according to Ojingwa and Yusuf. After arriving at the DSS office on the morning of March 1, Yusuf was questioned by someone who identified himself as Mr. Hassan about Jay FM's programming, he said.

"They started asking me questions about our station's coverage of [Nigeria's February 23] general elections," Yusuf told CPJ. "I told him it was news. We are doing our job." Yusuf said he spent about three hours with the DSS, during which time they told him they felt Jay FM's coverage could serve to heighten political tensions in the area. Clinton Garuba, managing director and chief executive officer of Jay FM, told CPJ that the DSS also summoned him later on March 1 and questioned him about the station's coverage of the February 23 general elections, particularly its reporting on Jos North/Bassa local government districts. The shutdown order came just after he left the DSS office, Garuba said.

When contracted by CPJ, Mr. Hassan confirmed himself as head of DSS investigations in Jos, but declined to speak about the case. Peter Afunanya, public relations officer for the DSS, told CPJ over WhatsApp that "no journalist was arrested in Jos by the DSS" but that agents did invite the managing director of Jay FM and "drew his attention to the negative activities of his station." Afunanya said he was aware that the station had been shut down and said he was "not able to speak for the NBC." Afunanya did not respond to a follow-up message on March 9 asking specifically if Ojingwa had been taken from the station on February 28.

When asked what was behind NBC's order to shut down the station, Armstrong Aduku Idachaba, director of broadcast monitoring at NBC, told CPJ that Jay FM had broadcast a sermon in which "the pastor was making hateful and inciting comments saying people in Plateau should not vote for a particular candidate" and that the NBC had reason to believe the station would not change its broadcast. Idachaba said that Nigerian law allows for a shutdown based on established pattern of breaches of the broadcast code and that "breaches earlier committed are enough to execute a shutdown order." Idachaba said the NBC may cooperate with the DSS in cases related to security or the breakdown of law and order.

Jay FM was fined and warned by the NBC over political broadcasts in mid-February 2019, including one by a bishop referenced as David Abioye that the NBC defined as "inflammatory," according to NBC sanction letters seen by CPJ. Garuba told CPJ that Jay FM stopped broadcasting David Abioye after the NBC sanction in mid-February. When asked by CPJ, Idachaba declined to comment on whether the NBC had identified instances of Jay FM's continued broadcast of Abioye.

When CPJ called NBC Director General Mallam Is'haq Modibbo Kawu, he picked up briefly before the line cut. CPJ's WhatsApp message to his number, which was marked as delivered, went unanswered.

Antia Ekanem, acting public relations officer at NBC, told CPJ that only the NBC director general and head of broadcast monitoring could speak on Jay FM's case, but that he was "not aware that the DSS was involved because in cases like this you don't bring in the DSS."

Idachaba told CPJ on March 11 that NBC sent a letter to Jay FM inviting the staff to a meeting on March 18, during which they would discuss possible reopening of the station.