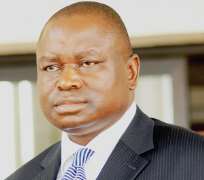 The victim, Onuorah Odoh, was reportedly gunned down by a security operative attached to the APC governorship candidate, Senator Ayogu Eze.

Eze and his supporters had earlier announced their decision to boycott the elections claiming that the Independent National Electoral Commission had failed to include his name on the list of candidates for the governorship polls.

While Eze and his supporters were in his country home at Umuida in Igboeze North Local Government Area lamenting the non-inclusion, a Toyota Hiace with registration number ENSG 3069, which was covered, drove to the gate with some unknown persons.

It was learnt that the occupants of the vehicle, who claimed to be Election Observers, had demanded to see Eze but were told that his residence was not a polling unit and that they should visit the polling centres for their observation.

Their insistence to see Eze aroused suspicion which attracted the crowd of supporters in the compound who immediately conducted a search on the bus to ascertain their real identities and mission.

The senator's supporters were said to have observed that the occupants had some campaign materials bearing the portrait of a governorship candidate and a vehicle with the Enugu State Government number plate.

It was also gathered that the alleged observers, who were all young men, had some black berets and insignias of the Aiye confraternity.

Suspecting that they were agents of the PDP apparently on a sinister mission, the crowd held them hostage and when the atmosphere became charged, policemen attached to Eze reportedly attempted to calm the situation by shooting into the air.

It was in the process that a stray bullet from the gun of one of the policemen hit Onuorah on the head and he died at the spot.

Onuorah, whose brother was the candidate for Enugu State House of Assembly on the platform of APC for Igboeze North 1 Constituency, had accompanied his brother on a solidarity visit to Eze's house when the tragedy struck.

Following the pandemonium, it was further gathered that the occupants of the bus were held hostage before policemen and soldiers came to the scene and took the remains of the deceased away.  They also rescued the “observers” whom they also whisked away.

When contacted, the State Police Public Relations Officer, Ebere Amaraizu, confirmed the incident but could not say if the victim was dead. He said that the police had commenced investigation into the incident.