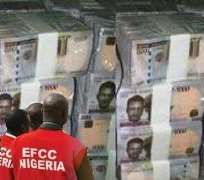 The Economic and Financial Crimes Commission, EFCC, has arrested six Commissioners in the Kwara State Government for allegedly withdrawing N1 billion a week to the Presidential and National Assembly elections.

A statement from the EFCC, obtained by Punch said the Ilorin zonal office, of the commission on Thursday uncovered about N1 billion cash withdrawal by the Kwara State Government, a week before the last presidential and National Assembly elections.

The EFCC said those arrested and currently being interrogated in respect of the suspicious withdrawal included the Commissioner for Finance, Nurudeen Banu; Accountant General, Sulaiman Ishola; Commissioner for Water Resources, Yusuf Abdulkadir; Head of Service, Susan Modupe Oluwole; Special Adviser, Commissioner for Energy, Eleja Taiwo Banu; Chief of Staff, Abdulwahab Yusuf; officials of the Secretary to the State Government, and those of the Government House.

“Investigations by EFCC operatives revealed that the said money was withdrawn from the state’s account domiciled with Sterling Bank,” it said.

According to the report, an official of the State Government, Hafees Yusuf, confirmed to the operatives that he got instructions from his boss to withdraw some monies sometime in February 2019.

“An employee of Sterling Bank, who is currently being interrogated by EFCC operatives, revealed that the Accountant General, Commissioner for Finance and Permanent Secretary of the Ministry of Finance, are signatories to the account where N720m cash was withdrawn from the Kwara State Government Account domiciled in the branch of the bank located at Post Office in Ilorin, between February 7 and 11, 2019,” the report added.

According to the EFCC, “Three Relationship Managers of the bank – Rahaman Alimi, Akinleye Ademola and Olarewaju Sarafa, were said to be the ones who packed the said money in bullion vans and personally delivered it to the Chief of Staff to the Kwara State Governor, Abdulwahab Yusuf.

“The bank officials further told operatives that they acted on the instruction of their ‘boss’ which was identified as, Rasaq Abolarin. Meanwhile, the officials of the Kwara State Government have been granted administrative bail, even as investigations continue. They are expected to be arraigned before a Federal High Court in Ilorin next week.”

It added that the suspicious withdrawals were uncovered after operators acted on a petition by a Non-Governmental Organisation, the Kwara Coalition for Good Governance and Accountability, asking for the probe of over N1bn loan that the State Government secured from a bank a few days before the general elections.

Hassan Omoiya, Secretary General of the organisation, noted that intelligence had it that the state government obtained the loan on February 13 from a bank, using the remittance of Kwara State VAT allocation due in February and March 2019 as collateral.

He further urged the EFCC to “determine the appropriateness of utilisation of credit facility of N1bn by Kwara State Government in the twilight of the general election.”