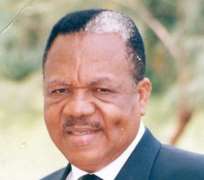 Barely few hours to the Saturday's Governorship and State House of Assembly Election, a top notcher of the Peoples Democratic Party, PDP, in Ogun State, Apostle Daves Salako on Thursday defected the Part y for the ruling All Progressives Party, APC.

The Former National Assembly member confirmed to our Reporter that he had endorsed the Candidate of the APC in the State in the election, Prince Dapo Abiodun as the next governor of the State and consequently directed his teeming supporters in the state to cast their votes for APC candidates in the elections.

Apostle Salako ‎who was a two term member of the House of Representatives from 2003 to 2011 represented Remo Federal Constituency of Ogun State and vied for for the Ogun East Senatorial District under the PDP in the party's -s primaries.

Recalled that Hon Jelili Kayode Amusan another two term member of the House of Representatives and the Candidate of the Party in the Ogun central Senatorial District ‎of Ogun state in the just Concluded National Assembly Election, had dumped the Party on Wednesday for APC ahead of the saturday's Poll.

An aide of Apostle Salako told our Correspondent in Confidence that the former law maker was actually moving to the ruling party along with his thousands of supporters across the state following the lingering crisis that had been rocking the Party which had defiled all possible solutions .

When contacted , Apostle Salako confirmed the development, saying that his defection was with an immediate effect after due consultations with the members of his political family in the state and across the country .

Apostle Salako stated that he was moving to the APC with his political structures to rally support for the Governorshp Candidate of the Party in the Saturday's election, Prince Dapo Abiodun annd the candidates of the Party in State House of Assembly Election‎.

He therefore called on his supporters and the people of the State irrespective of their Political parties to rally supports for the APC in the elections for the even development and the Progress of the State.

Apostle Salako made it clear that he took the decision in the over all interest of the State based on his conviction that Prince Abiodun and other APC candidates Possessed what it required to take the State to a greater height.