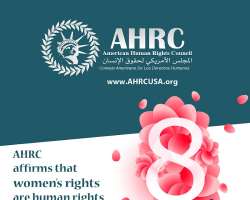 The American Human Rights Council (AHRC-USA) joins the global community in observing and celebrating the International Women Day that is globally recognized annually on March 8.

The International Women Day serves as a reminder that women’s struggle for equal rights within our societies is still far from being over despite progress in a number of countries.

AHRC affirms that women’s rights are human rights and those rights are universal. Wars and conflicts have taken a special toll on women and children. Helping end wars and conflicts goes a long way in improving the lives of women in less developed countries.

“In today’s climate, our society should be more protective of women than ever before. Despite overcoming years of hitting the glass ceiling, women are still at the front lines fighting for equity and inclusion at too many tables. To many women, it feels like we’re on the brink of something new, something powerful and life changing for the generation behind us.” Said Ms. Stephanie Crider, AHRC Advisory Board Member. “When considering today’s climate, this month’s Commission on the Status of Women is not only timely, its anticipation is palpable.” Continued Ms., Crider.

AHRC supports women and their struggle for equality. AHRC is pleased to announce that an AHRC women delegation will be participating in the UN Women – United Nations Entity for Gender Equality and Empowerment of Women 2019 63rd session of the Commission on the Status of Women that will be held on March of 2019 at the United Nations in New York City, from March 11 to March 22, 2019. “International Women's day is March 8. This is a global day celebration. Displaying the social, economic, cultural, and political achievements of women” said Ms. Caryl Conway, AHRC Advisory Board Member. “This event leads up to the U.N. Women's conference. I am proud to say the AHRC will have our Women's Empowerment team in place. Remember nobody wins when women are left behind” continued Ms. Conway.

“AHRC is dedicated to the empowerment of women,” said Dr. Saleh Muslah, AHRC Board President. “AHRC is committed to the advancing of the human rights of women,” added Muslah.

“AHRC women’s participation at the most high profile women’s rights event in the world is a landmark for AHRC,” said Imad Hamad, AHRC Executive Director. “No human society can achieve its potential until women achieve all their rights,” concluded Hamad.