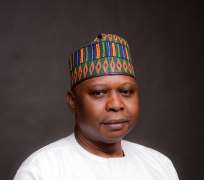 In the light of the above, the Rights group has therefore asked the Economic and Financial Crimes Commission (EFCC) to stop forthwith the unconstitutional clamp down on political opponents of president Muhammadu Buhari and operate only within the perimeters of the rule of law, due process and obedience to the constitution of Nigeria.

The group said the arrest of such a fine and robust gentleman who passionately loves Nigeria is a disincentive for younger persons who are willing to make sacrifices for the betterment and advancement of Nigeria who will now begin to have a rethink that afterall Nigeria is not worth dying for sunce those who hold executive powers misuse their powers and offices for self aggrandizement and political enslavement of the rest of the populace.

"Tanimu Kabiru Turaki is easily the most detribalised patriotic Nigerian whose mien and demeanour show a remarkable attribute of a gentleman who is at peace with God and humanity. He truly loves constitutional democracy and remains a legal pillar and a distinguished icon of human rights, inter -ethnic and inter -religious dialogues. He is the precise character and embodiment of goodness that the Federal government ought to tap to enrich ongoing conversations on how to deliver national peace and harmony in an increasingly fractious and fractionalised disunited entity under the current dispensation".

Also, the Rights group said it would appear that the senior lawyer who is the Deputy Director General of the Atiku Abubakar presidential campaign council may have been detained to force the leading opposition party Peoples Democratic Party (PDP) from making good its threats to challenge the outcomes of the recent presidential election in the court of law in line with constitutional provisions. HURIWA restated its affirmation that it is not a crime to pursue the legal steps if a political player feels strongly that the rules of the game have been wantonly breached and raped by the electoral umpire".

In a statement by the National Coordinator Comrade Emmanuel Onwubiko and the National media Affairs Director Miss Zainab Yusuf, HURIWA stated that the anti-graft agency by its persistent persecution of opposition politicians has gradually but graphically portrayed Nigeria as an entity that is politically unstable just as the Rights group describes these tendencies as grave dangers to the survival of constitutional democracy warning that these dictatorship may lead to mass migration out of Nigeria since it would seem that the governme t is determined to convert the country to a maffia fiefdom and a jungle unfit for humane co existence by law abiding human beings.

“Constitutional democracy operates in total compliance with the due process of the law in such a way that law enforcement institutions are not weakened and converted to private executioners of persons holding executive positions in the federal government of Nigeria. The EFCC must stop the illegal operational mode that sends the wrong signal to the world that Nigeria is under a totalitarian dictatorship.”

HURIWA recalled that Section 36 (1): “In the determination of his civil rights and obligations, including any question or determination by or against any government or authority, a person shall be entitled to a fair hearing within a reasonable time by a court or other tribunal established by law and constituted in such manner as to secure its independence and impartiality.”

HURIWA recalled that Section 35 (1): “Every person shall be entitled to his personal liberty and no person shall be deprived of such liberty save in the following cases and in accordance with a procedure permitted by law -(a) in execution of the sentence or order of a court in respect of a criminal offence of which he has been found guilty;(b) by reason of his failure to comply with the order of a court or in order to secure the fulfillment of any obligation imposed upon him by law;(c) for the purpose of bringing him before a court in execution of the order of a court or upon reasonable suspicion of his having committed a criminal offence, or to such extent as may be reasonably necessary to prevent his committing a criminal offence”

HURIWA has therefore demanded his unconditional release or his production before a competent court of law which in any case ought to grant him bail since section 36(5) recognises accused persons as innocent until proven guilty.