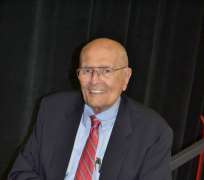 All those who are born are bound to eventually die. We live on borrowed time. A friend once said that everything can be made up except time. Once it passes, it is gone. What are we on earth for? For a man like the late Congressman John Dingell, it was to be a public servant, to serve others and to make a difference.

People like the late John Dingell live on forever in our memory for making a difference in the lives of many people. I am one of these people. My community also was greatly helped by Mr. Dingell.

John Dingell, simply put, was a good human being. From a good person you can make a good anything and Dingell decided to be a good representative of his district. He had a passion to work with people and people from all backgrounds-faiths, national origin, nationality, color, race and gender found him approachable and found themselves treated by him with dignity. His door was always open to help others. He helped me personally during the darkest chapter of my life.