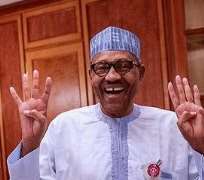 According to the wishes of President Muhammadu Buhari on this well deserved victory, "the Buhari Support Organisations, Delta State Chapter, wishes to congratulate in general, all Nigerians and in particular, the people of Delta state for taking the time out to peacefully participate in the national elections of 2019".

The head of Media, Elsie Ijorogu-Reed and Victor Sorokwu, Publicity Secretary respectively, expressed thanks to the leadership of the group and all who worked for the victory of Buhari.

"We are very appreciative of our BSO State Executive, Local Government Executives and our indefatigable foot soldiers, the Unit Door-To-Door Canvassers and Co-campaigners and all affiliate groups of BSO in Delta State who worked tirelessly for the success we are all proud of today.

"We must also thank the Hon. Minister of Petroleum, Dr. Ibe Kachikwu for his support of the re-election programmes of BSO, WAYPCC and APC in Delta state.

"We also appreciate the commitment and devotion of the State Coordinator of the Women and Youth Presidential Campaign Council, Chief Emma Ejiofor for his leadership and the Media Team who worked relentlessly.

"Your collective hard work has ensured that our Principal, President Muhammadu Buhari received more votes in Delta in 2019 than he did in 2015. It's to your credit that the Buhari Support Organisations is now a household name in Delta state as it is in other states of the federation".

According to them, President Muhammadu Buhari believes that the victory is rightly yours and he's counting on your continued support as he pilots the affairs of this nation in the few months of the life of this administration and onward to the second term in the Next Level.

"The task of nation building that was thrust on our President four years ago, has just received a massive boost.

"We all must roll up our sleeves and be ready to make more sacrifices as volunteers in the vine yard of honour, integrity and to stand with President Buhari as he takes us to the next level", the statement added.