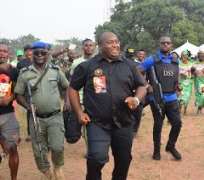 It was indeed a moment of jubilation and fanfare as the candidate of the Young Progressive Party (YPP), Dr. Patrick Ifeanyi Ubah was declared the winner of the 2019 Anambra South Senatorial race in the last Saturday election.

Annoucing the result at the headquarter of the Nnewi North Local Government, Nnewi, the INEC Returning Officer of the area, Prof. Meshach Nnama Umenweke of the Faculty of Law, Nnamdi University, Awka noted that the business mogul came first with 87,081 votes, followed by Chris Ubah of the Peoples Democratic Party (PDP), Prince Nicholas Ukachukwu of All Progressive Grand Alliance (APGA) and the incumbent Senator Andy Ubah of the All Progressive Congress (APC) who polled 52,462 votes, 51,269 votes and 13,245 votes respectively.

In a heartfelt message of appreciation, Dr. Patrick Ifeanyi Ubah whose joy knew no bound extolled the good people of Anambra South for registering their confidence in him, by giving him the highly 'sought after' mandate this time to serve. He noted that his decision to contest for the Anambra South Senatorial seat was solely driven by his deep-rooted passion to champion the recovery of the Igbo economy, while consolidating on the legacies of our founding fathers, and expressed his heartfelt gratitude to everyone who believed in him and the project.

Avowing his readiness to serve his people and Ndi Igbo in general, Dr. Ubah said:

"Today, as we stand poised to build and move Anambra South to unprecedented heights, I wish to reassure everyone of you that I will not let you down. The confidence you all have reposed in me by virtue of this historic victory will be not be taken for granted as I am under no illusion of the enormity of the task ahead".

Though the election was successfully held in Anambra South, there were certain hitches and impediments that attempted to debilitate its smooth flow in various communities across the zone. For instance, in different pooling units in Ebenator and Ukpor, both in Nnewi South L.G.A, there were recurrent issues of Card Readers' failures which were promptly followed up with replacements by the Supervisory Presiding Officers (SPOs) of the respective pooling units.

Similarly, there was also a delay in the collation of results at the pooling units in Ukpor Ward Six which lasted till pass 4 in the evening due to absence of single security officer in the area, but was also promptly solved by a put through to the INEC Official by a National Light Correspondent, who immediately sent some men of the DSS to the venue and the compilation began.

Notwithstanding, the election in the entire Anambra South was adjudged not only smooth, but also free, fair, credible, safe and acceptable, given that many of those who lost in their contests, including Chief Chris Ubah of PDP, and others have begun to congratulate the winners and wish them well.