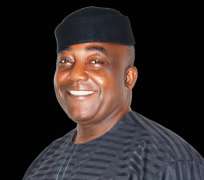 Announcing the results at the collation centre, the INEC officer, Dr. Edwin Asikaoh of the federal college of Education Asaba said, the election was free and fair.

In his reaction Hon. Leo Ogor through Mr. Jay Ogor said, “We thank God for the victory and we dedicate it to the good people of Isoko Nation for entrusting us yet again with their mandate for the 5th term”.

He noted that he was humbled by the result and commended Isoko people for their support.

In a swift reaction to the declared results, Hon. Silas Bowue Director General to Hon. Joel Onowakpor Thomas Campaign protested the result, saying, the declaration is illegal and inconsistent with the provision of electoral act.

The law says “where the total vote lead margin is less than the total number of registered voters in an area or unit council in an election, a winner can’t be declared until a supplementary elections are held in those places.

He stated that the hurry in the declaration of Hon. Leo Ogor, minority leader in the national Assembly as a winner reveals an underground activities by INEC and must be reverted.

He noted that five petitions has been submitted to INEC on the need for the cancellation of results of some wards in Isoko federal constituency due to cases of manifest fraudulent manipulation of the voting process and violation of the electoral act during the election.

Also, results from Delta South Senatorial District have been announced with Senator James Manager of the PDP declared winner of the elections.