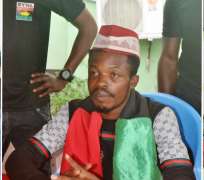 The group said no people can push the Igbo away from areas they and occupy and developed. National Leader of BNYL, Princewill C Richard urged the Igbo population in Lagos to wage a fight back on the APC supporters of Yoruba extraction, "I think it is foolish of Southerners to fight and die for two northern brothers, the Western Leaders should calm the situation down if they don't want war in Lagos.

Igbos and other tribes from the east should wage a fight back if the attacks continues".