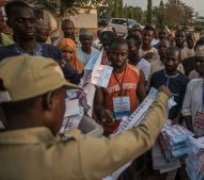 A total of 18 National Youth Service Corps members were abducted on Saturday in different locations in Akwa Ibom by unknown gunmen. 14 have since been freed, resident electoral commission in the state, Mike Igini said.

Ten youth Corp members, who worked as adhoc staff were abducted in Abak in Ikot Ekpene Senatorial, four in Itu and another four in Ikono.

“At Abak 10 corps members that were abducted were released yesterday and at Itu, four corpers were also kidnapped,” Igini said.

In Ikono, he said “that is one of the areas they smashed several polling units. They have a total of 11 polling wards they destroyed about 10. And four Corp members that were kidnapped were released.”

Igini said two corps members were also arrested in error by the police and have been freed.

“After my interaction with the Commissioner of Police they were also released as the fact before us showed that it was an honest mistake of using one paper for another. It was not deliberate, materials were mixed up.

However, the Akwa Ibom State Police Public Relations Officer, Mr Odiko MacDon said he was not aware of any abduction.

“There was no abduction,” MacDon said.
“I just spoke with state NYSC coordinator and there is no report of any corps members missing anywhere. We have not received any report that they were abducted.”

“While on patrol on Saturday with the Commissioner of Police and other service chiefs, we saw some corps members who left their duty posts on the claims that one or two persons were trying to invade their polling unit.

“We took them back to continue with their work. No corps member was abducted.”