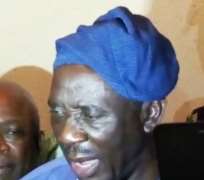 Chief Francis Fadahunsi, candidate of the Peoples Democratic Party has been declared the winner of Osun East Senatorial seat.

Fadahunsi defeated Jibola Famurewa of the All Progressive Congress in the National Assembly election conducted by the Independent National Electoral Commission (INEC) on Saturday.

Members of PDP and supporters of Chief Fadahunsi were happy and they jubilate the victory of PDP in Osun East Senatorial District.

The Returning Officer, Professor Adegbehingbe Olayinka Oladiran declared that the PDP candidate got 115,893 votes while the candidate of the APC got 105,720 votes.

Famurewa is currently a member of the House of Representative while Fadahunsi who retired as Deputy Comptroller General of the Nigerian Custom Service has been contesting for the seat in the last three political dispensation.