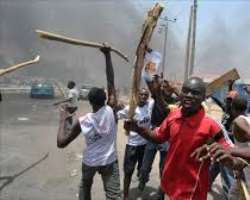 No fewer than two persons have been killed while three others were injured in Ndiagu Amagu ward one in Ikwo local government area of the state.

The incident happened on Friday night. Police Commissioner in the state, Awosola Awotunde confirmed the incident to our Reporter.

"The injured ones are being treated in the hospital. We are treating them as suspects for now as they were involved in the clash", he said

The member representing, Ikwo/Ezza South Constituency and candidate of the People's Democratic Party, PDP, Lazarus Ogbe accused the All Progressive Congress, APC in the state of masterminding the attacks.

The APC candidate for the Ikwo/Ezza South Federal Constituency, Chinedu Ogar hails from the ward where the incident happened.

Hon. Ogbe said that one of those killed was his agent for the polling unit in the area.

He gave the name of those killed as Igwe Ukwa and Egbe Oroke while those injured are Ejike Simon Igwe and Alo Nwamgbo.

The lawmaker also alleged that polling materials for the ward have been hijacked.

"Voters have come out and are waiting for election to commence but nothing is happening there".

He said a report of the hijack have been made to INEC.

His allegations could not be independently verified at press time.

Spokesman of INEC in the state, Andy Ezeani said the security situation in the state was adequate.

Pressed on whether voting is going on in Amagu, he said, "I think so, I will have to talk to my people on ground and get back to you".

He was yet to do so at press time.