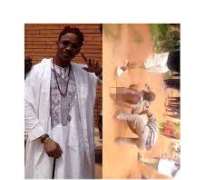 The arms of the law has finally decended heavily on the sacked aide of the Delta state governor, Mr Friday Eluro, who allegedly abducted and molested a lady for challenging him as the police on 18th February 2019, charged him to an Ashaka Magistrate Court, where he was remanded in Kwale Prison custody.

In a press release Wednesday night made available to newsmen in Asaba, by the Ag Police Public Relations Officer (PPRO), ASP Chuks Oresewezie, said: “Delta State Police Command in its bid for quick dispensation of justice had on the 18th February, 2019 charged to Court one Friday Eluro ,male, of Boji Boji Owa and two others following a trending video of a woman that was stripped necked. The said Friday Eluro was a former aide to the Governor and a former Chief in Owa Kingdom of Ika North East Local Government Area, Delta State. He was said to have more than 20 boys in his compound, whom he uses for his nefarious activities. The video attracted public attention and sympathy.

“In the light of the above, a team of SAKCCS on the 7/2/2019 between 1600hrs and 1700hr, swung into action, tracked the suspect to his compound at Boji Boji Owa and arrested him with two others though not without resistance.

“The Police after their investigation on 18/02/2019 charged the said Friday Eluro and two others to Ashaka Magistrate court for his despicable act of abduction, torture and dehumanizing treatment of stripping a woman naked.

“The volatile nature of his community has informed the reason for applying for assumption of jurisdiction to Ashaka Magistrate court and he has since been remanded in Kwale prison.

“This is a warning signal to anybody who thinks he/she is above the law or can take the laws into his /her hand.

“The Police authority is prepared to deal with any act of crime and criminality by any means legally possible. The Commissioner of Police assured members of the public of his commitment to their safety and security at all times.

Meanwhile, in line with earlier press release on the need for vigilantes and private security guards volunteer organization to steer clear of the 2019 election security, the state Police Command has charged to Court three (3) suspects namely, Uvwiejitobor Akpevwe, (2) Alfred Joseph, (3) David Ukiri, all male from Udu in Udu Local Government Area of the state who claimed to be vigilante detailed by their Local Government Chairman to escort their electoral materials after sorting and sharing.

The three suspects were arraigned at Chief Magistrate Court Asaba to serve as a deterrent to who would be offenders and as well as to inform members of the public that the sole responsibility of securing INEC materials, INEC offices/officials, polling units, collation centers, racks rest squarely on the Police in collaboration with other approved security agencies as mentioned in the earlier press release.

The Police authority said it would not hesitate to arrest and prosecute any offender according to the law, while assuring members of the public of its commitment to the security and safety.