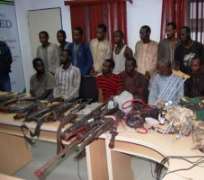 Bandits at the weekend killed an army captain, six other civilians and stole hundreds of animals in Kasai community, Batsari Local Government Area in Katsina State.

owever, the Nigeria Army in Katsina State could not disclose the identity of the slain captain.

It was gathered that the terrorists stormed the Katsina community at about 1a.m and shot sporadically, forcing the army and residents of the area to flee, and were later to engage them, leading to the death of the victims.

He said: “The bandits first attacked our military station, killed the army captain and burnt down the operational Hilux vehicle. They later entered our village and visited the houses of the six civilians separately and killed them. They also carted away money and phones of the victims”.

According to him, the bandits carted away several animals, motorcycles and other valuables worth billions of naira belonging to the residents.

Meanwhile, the Katsina State Governor, Aminu Bello Masari, yesterday paid a condolence visit to the community and sympathised with the families of the victims. (THISDAY)