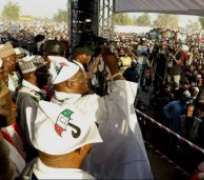 Nine supporters of the Peoples Democratic Party   slumped at the Sani Abacha Stadium in Kano state when party's Presidential candidate, Atiku Abubakar, visit  the state for his campaigns.

Atiku supporters had trooped out in thousands to the stadium on Sunday.

The presidential candidate was still at the palace of Muhammad Sanusi, emir of Kano, when the crowd took over the stadium.

The president secured his highest number of votes in Kano in 2015 but Rabiu Kwankwaso, who was governor when this happened, is now backing Atiku.

Analysts believe that  with Kwankwaso's influence, Atiku would secure significant votes in the ancient city.

The supporters flooded the stadium, making it difficult for some to breath. A Cable reporter at the venue claim nine persons fainted, among whom were six males and three females.

The Peoples Democratic Party (PDP) Presidential candidate, Atiku Abubakar has promised to give priority attention to agriculture and commerce if elected President.

NAN reports that Atiku made the promise while addressing party supporters at the rally held at the Sani Abacha stadium, Kofar Mata in Kano on Sunday.

He said if given the mandate in forthcoming general elections, he would do everything possible to ensure that the agricultural sector was accorded the necessary support to boost food production.