By Media Initiative against Injustice, Violence and Corruption 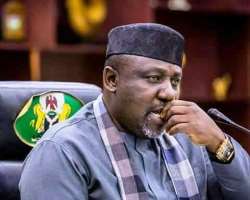 The Media Initiative against Injustice, Violence and Corruption condemns in unequivocal terms, the dastard killing of a Youth at Agwa junction, Ejemekwuru in Oguta LGA Saturday evening.

Executive Director of MIIVOC, Dr. Walter Duru, who made the condemnation in a Statement he personally signed described the development as unfortunate and unacceptable, while calling on relevant agencies to fish out the trigger-happy cop that perpetrated the act.

Blaming the Imo State Governor, Chief Rochas Okorocha for allegedly ordering the killing of the young man, Duru called for a thorough investigation into the matter.

"The news of the dastard killing of a Young man at Agwa junction, Ejemekwuru Saturday afternoon came to us as a shock. Our preliminary investigations revealed that security operatives attached to Governor Rochas Okorocha opened fire on protesting youth in the area. Eye witness accounts say the youth protested over a Transformer said to have been brought by Okorocha during a political campaign in the area.

They had questioned the rational behind such a gesture, alleging that he diverted funds meant for settlement of electricity bills by Imo State Oil Producing Areas Development Commission-ISOPADEC for eight years, leaving the area in darkness perennially. While we make further investigations, we call on the Law Enforcement Agencies to fish out the killers of the young man. We shall not accept anything, but justice in the matter", Duru stressed