BodyBaggers, Incorporated (A Nation in Ruins) 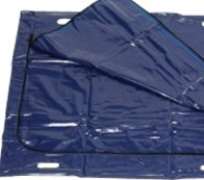 Is the legacy of a violence-free, clean, free and fair election too much to ask from a self-acclaimed, sanctimonious, ‘man of integrity’? Apparently yes if that man is Muhammadu Buhari, the greatly over-hyped and grossly under-achieving President of Nigeria. If a supposed ‘man of integrity’ cannot provide an unpolluted atmosphere for an ‘election with integrity’, of what further use is he?

Jesus Christ, the Son of God and God himself provided the answer, when he said in Mathew, 7:16 “by their fruits you shall know them.” The main fruits of Muhammadu Buhari’s sojourn in the corridors of power in Nigeria are blood, propaganda and you guessed rightly, body-bags. Everywhere Buhari goes, there follow violence, blood and death. Even his campaign rallies are inconclusive if there are no associated deaths.

At a recent election rally in Jalingo, Taraba State, five deaths were reported.When he attended a rally in Maiduguri, Borno State, an unspecified number of deaths were recorded. Four persons died in an accident enroute to his campaign rally in Jigawa State. Ten persons died in two separate incidents in the immediate aftermath of his rally in his home Katsina State. The list goes on even as the death toll mounts.

Supporters of President Buhari suggest that it is a sign of his overwhelming popularity that his rallies are attended by uncontrollable crowds resulting in hysterical stampedes and unavoidable deaths. Therein lies the great paradox.

If President Buhari is so popular as his supporters and the turnout at some of his rallies suggest, why does he and his handlers find itimperative to weaponize the misnamed Independent National Electoral Commission (INEC) which is anything but independent?

Why must they weaponize and turn the Nigerian Police, the Nigerian Army, the Economic and Financial Crimes Commission (EFCC), the Code of Conduct Tribunal, the Judiciary and all key institutions of the State into the President’s electoral returning agents?

The President and his team’s insecurity appear so great that they have resorted to threatening even terrorizing foreign election observers who are truly independent and clearly beyond their immediate control. One of his henchmen, Nasir El-Rufai, the ruthless Governor of Kaduna State recently issued what was widely interpreted to be a chilling warning to foreign election observers.

Quoting him,“those that are calling for anyone to come and intervene in Nigeria, we are waiting for the person that would come and intervene, they would go back in body bags.”El-Rufai’s threatening stance was immediately supported by the Buhari Presidency and the president’s All Progressives Congress (APC) party as a stout reaffirmation of a patriotic readiness to defend Nigeria’s sovereignty.

However, it was the same Governor El-Rufai who a couple of years ago confessed that he paid humongous sums of money as appeasement to foreign Fulani herdsmen from Niger Republic and Chad Republic in a bid to stop them from maintaining their killing spree in Nigeria. President Buhari himself in Washington D.C. said the killing of Nigerian peasants by herdsmen was the handiwork of mercenaries from Libya.

For the first group it is dollar appeasement and an admonition to the victims to learn to accommodate their “foreign” aggressors. For the second group it is body bags. What a duplicitous country.

By now Nigerians have mostly made up their minds on who they would vote for. This is good and is to be highly applauded. To those people who despite all warning signs and omens, resolutely insist on supporting President Buhari, I say good-luck.

If President Buhari, against all odds by my own assessment, wins the forthcoming elections, I can with all good conscience live comfortably with that reality secure in the knowledge that Nigerians were adequately forewarned of the horrendous future that awaits them.When that bitter future begins to unfold at the next level, I would God Willing be around to remind Nigerians of the choice they made and the imperativeness of living with the consequences of their choice.

Yet the barest minimum demand we make of President Buhari, Nigeria’s self-acclaimed ‘man of integrity’ is to give Nigerians an‘election with integrity’ widely acclaimed to be so by sundry, neutral foreign observers.

Foreign election observers should be given unimpeded access to monitor and observe Nigeria’s elections closely and meticulously. Most importantly at the end of their monitoring assignments they should be able to depart Nigeria back to their respective home countries in peace and not in body bags.