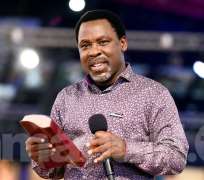 In his first televised sermon of 2019, prominent Nigerian Pastor T.B. Joshua divulged an intriguing “revelation” he claimed to have received “from God”.

“It is not the number of people that enter here that matter but the souls that are being saved,” the cleric frankly told congregants at The Synagogue, Church Of All Nations (SCOAN) in Lagos, Nigeria on Sunday 3rd February 2019.

Joshua said this principle was evident in the lives of the Biblical apostles. “How many of them had a church? They evangelized all over. We are looking for crowds today; what of the souls?”

The cleric then reiterated his conviction that money must never be a motivation for seeking large church attendance. “We are not here because of money or offerings; we are here because of the souls… The foundation of the church is the Holy Ghost.”

Joshua disclosed details of a ‘revelation’ where he claimed God warned him to ‘be careful’. “Membership is not your strength; look for souls for the Kingdom of God. Don’t because of money seek a crowd,” he explained, quoting this as the message he received ‘from above’.

The admission came as part of a sermon titled, ‘A True Christian Is Tested’ in which Joshua encouraged his listeners to never allow their challenges in life to overwhelm them.

“As a Christian, your struggles make you stronger,” he stressed, adding that the challenges we encounter actually constitute “the beauty in our journey to eternal life”.

The cleric further emphasised the need to involve God in every aspect of one’s life.“Don’t forget – Jesus does not maintain what He does not form; this is why you have to carry Him along,” he taught.

“A true Christian is tested by his ability to face circumstances and situations,” he concluded.

The video of his sermon published subsequently to YouTube was warmly received, many viewers applauding the cleric for the blunt truth he propagated and how he distanced himself from using ministry as a platform for making money.

Tawia Acheampong is a religious writer based in Accra, Ghana