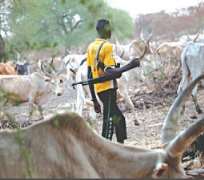 Several persons were reportedly killed and many others injured after suspected herdsmen attacked The Taavaan, in Mbadwem, Guma LGA of Benue State.

According to online reports, one those killed by the rampaging herdsmen was a community leader, Mr. Clement Kulugh.

Residents of the community have fled their homes for fear of further attacks from the herdsmen.

According to reports, the herdsmen were engaged in gun battle by Nigerian soldiers stationed in the troubled area.

This resulted in heavy shooting around Tomatar village and its environs in Guma Local Government Area of Benue State,

on Monday.
The SUN reports that it was informed by local sources that the attackers stormed the area shooting sporadically, sending locals scampering for safety.

A native of Tse Tesghem village, one of the affected communities, Mr. Dennis Imernyi, who spoke with the newspaper’s correspondent on Tuesday morning said his people called and told him over the night that their village and other surrounding villages were under attack again.

The reports adds that Tse Tseghem village near Tomatar is one of the villages in riverine area of Benue where over 50 persons were massacred on New Year day in 2018.

Imernyi said that his brothers who reside in the village called to inform him on Tuesday morning that two people were shot dead, three houses burnt and a few others sustained gunshot injuries during the attack.

“Reports say the armed gangs engaged the soldiers stationed in the area in a gun battle that lasted for several hours before they were pushed back to the neighbouring Nasarawa State,” he said.

He told The SUN correspondent on the telephone that the armed bandits tried to invade Tomatar in Guma but his troops engaged them in a gun battle and inflicted heavy casualty on them.

Yekini stated that his troops did not suffer any casualty in the battle even as he assured the Benue people that the OPWS would continue to do its best to ensure the safety of lives and property of all by dislodging all armed criminals anywhere in the state.