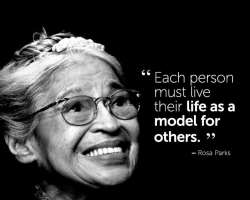 Today, February 4th, marks the 106th birthday of civil rights icon Rosa Louise Parks. Ms. Parks inspired many people from all walks of life by her courage and her determination to take a bold stand against racism and discrimination during one of the darkest eras in American history.

In honoring Ms. Parks and her memory, we honor the sacrifices of the past and the present in the hope of a better future. Ms. Parks reminds legacy reminds us all that you don't have to wait for a hero to change society. Each of us can be the change that we aspire to. Her life's legacy affirms that you can be strong and effective without being loud and using foul language. She is a good role model for all of us, especially our politicians.

Rosa Parks was an activist. She was not just a tired woman who acted in the spur of the moment. She was a well-informed citizen who believed that staying away from resisting injustice makes one part of the problem. Rosa Parks demonstrated her quiet strength and determination on December 1, 1955 in Montgomery, Alabama when she refused to give up her bus seat. A small act of courage, nonviolent, that helped contribute to the end of segregation.

Ms. Parks believed in the importance of preparing the youth to continue the struggle for equality and justice for all. She and Ms. Elaine Steele in 1987 established "Pathways to Freedom," the flagship program of Rosa and Raymond Parks Institute for Self Development.