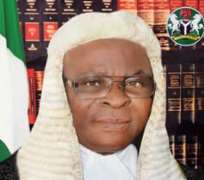 Last Friday suspension of the Chief Justice of Nigeria, Justice Walter Onnoghen by President Muhammadu Buhari and the consequent swearing in of Justice Ibrahim Tanko Muhammed as acting CJN is the greatest assault on our democracy, constitution, the rule of law, principles of separation of power and ugly display of the fangs of dictatorship. It is yet another affirmation that the cabal is in control. It is the greatest advertisement that our president is yet to know the difference between dictatorship and democracy. In a democracy, the supreme law of the land is the constitution and the actions of those in elected positions are guided by that. In dictatorship, on the other hand, the whims and caprices of monarchs and military rulers happened to be the order of the day. We must remind our leaders that ours is a democracy where sovereignty resides with the people.

The argument of Buhari that he acted based on the order received from the Code of Conduct Tribunal is begging the question. There was a valid ruling from Court of Appeal that the status quo should be maintained. Whatever the sentiments or interests of the judges of Code of Conduct Tribunal, it is an elementary principle in law that when a superior court gives an order, it is binding on a lower court. The presidency cannot claim ignorance of the ruling of the Appeal Court. Even for the sake of argument, if the two courts are of cognate jurisdictions, the norm is that it is the last ruling that should be obeyed.

The fundamental underpin of the principles of separation of power is that the three arms of government have their roles well defined and none should either claim to be superior to another or attempt to usurp the powers of others. Agreed that a petition is written against Justice Onnoghen, the wheel of justice should be allowed to turn. Since the three arms of government – the executive, the legislature and the judiciary derive their power from the constitution, any act outside the letters and spirit of the constitution is illegal and no amount of political sophistry and media propaganda can alter that constitutional reality.

Furthermore, while the president has the power to appoint Chief Justice and seek the confirmation of the senate, he does not have the power to sack him. Those who doubt my submission should read Section 292 of the 1999 constitution. It is the National Judicial Commission that has power to sanction any erring judge and in the case of CJN, the senate can also exercise similar power. Buhari as elected president has no such power. When elected officials act outside the constitution, it is a recipe for disaster and chaos. The NBA should challenge the illegal act of the president in court. It is beyond street demonstration and press briefing. This action of the president should be tested in the court.

The media handlers of the president are dumb because what has happened is a stab at the very heart of our democracy. The judiciary is the hope of the common man and the head of that arm of government should not be subjected to any form of indignities. The law should take its course and it staggers the imagination why the presidency is undue haste to dispense with the services of the Chief Justice of the federation.

I watched the Information Minister, Lai Mohammad on the tube defending the action of his principal, the president. A cynical smile played on the face. If the alleged crimes of the Chief Justice are true, it is left for the court to decide. More so that our judicial system works from the concept of innocent until proved guilty. By the action of the president, the Chief Justice is already condemned and this is not how justice works. It would not be a bad idea for the presidency to reverse itself or face the prospect of humiliation from the actions of the National Assembly. This is a constitutional crisis and a looming disaster we cannot afford few weeks to crucial national elections. Patriotism should override any parochial political gains at this moment.