Anti-Party Activities: Gov. Okorocha, And Others to appear before APC Disciplinary Committee In Owerri 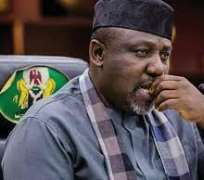 Imo State Governor, Rochas Okorocha and six other chieftains of the All Progressives Congress (APC) in the state have been summoned to appear before a disciplinary committee set up by the state chapter of the party over alleged anti-party activities.

The seven men are to appear before the committee tomorrow (Wednesday) in Owerri, the state capital.

According to the invitation letter signed by the Disciplinary Committee Chairman, Mr. Matthew Omegara; and Secretary, Mr. Kevin Ugwu on Tuesday, the affected APC stalwarts were invited for questioning into what it described as “ugly activities” and the outcome of the probe would be made public after investigations were completed.

The invitation letter reads in part, “The above-named are directed to appear before a disciplinary committee of the All Progressives Congress, Imo State, to answer to complaints made against them respectively on anti-party activities, conduct likely to have adverse effects on the party and bring the party into hatred, contempt, ridicule or disrepute and factionalisation of party membership.”