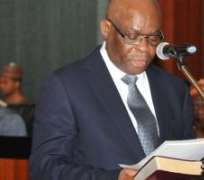 The Federal High Court in Abuja has stopped the Federal Government's plan to arraign the Chief Justice of Nigeria, Justice Walter Onnoghen, before the Code of Conduct Tribunal even as Danladi Umar led tribunal had earlier shifted the arraignment of the CJN to January 22.

The Federal Government through the Code of Conduct Bureau filed six counts of non-declaration of assets against the CJN on Friday.

He was due for arraignment before the CCT on Monday but he was absent from court.

He ruled in the two different suits that the defendants should be served with all the papers filed and they should appear in court at the next hearing.

According to the newspaper, one of the two suits marked FHC/ABJ/CS/27/2019 was filed by incorporated ‎trustees of the Centre for Justice and Peace Initiative.

Those joined as defendants in the suit, the Attorney-General of the Federation and Minister of Justice, Mr. Abubakar Malami, the Chairman of CCT, Danladi Umar; the National Judicial Council, the Inspector-General of Police, ‎Mr. Ibrahim Idris, and the Senate President, Dr. Bukola Saraki.

‎The other suit marked FHC/ABJ/CS/28/2019 was filed by the incorporated ‎trustees of the International Association of Students Economists and Management.

The suit has as the defendants, Attorney-General of the Federation and Minister of Justice, Malami; the CCT, the CCB, the Chairman of CCT, Umar; and the Inspector-General of Police, ‎Idris.

The applications were being filed before the Federal High Court in Abuja while the CCT proceedings where Onnoghen was being expected to be arraigned was ongoing.

‎Justice Onnoghen was however absent at the CCT proceedings forcing the tribunal to adjourn till January 22.

But Justice Maha ruled at the Federal High Court on Monday that no steps should be taken in respect of the trial until January 17 when all parties to the two suits should return to court for the hearing of the plaintiffs' motion on notice.

Meanwhile, the CCT had earlier shifted the arraignment of Justice Onnoghen, , to January 22, 2019 following the issue of improper service summons on the CJN raised by his counsel Chief Wole Olanipekun.

Olanipekun also argued, in his application challenging the jurisdiction of the court to entertain the charges, that it should not be heard in the absence of his client.

Malam Umar Aliyu (SAN), counsel for the Federal Government, objected to Olanipekun's submissions, adding that the defendant was duly served.

Aliyu also said the application challenging the jurisdiction of the tribunal should not be entertained unless the CJN had taken his plea.

The tribunal chairman, Umar Danladi, later ruled that the CJN's arraignment will now take place on Jan.22, ordering a fresh service of summons on the CJN.