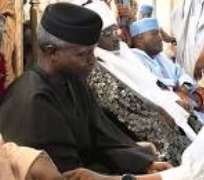 A former national Chairman of the Peoples Democratic Party, Alh Adamu Mu’azu Adamu has defected to the All Progressives Congress.

The chairman, who has distanced himself from the activities of the party since he left it’s topmost seat, was heavily rumoured to be romancing the ruling party when he returned to the country last year.

Muazu, also a former governor of Bauchi state, led the PDP to defeat during the 2015 general elections in the country, which ended Ex-President Goodluck Jonathan’s re-election bid.