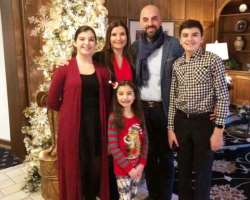 The American Human Rights Council (AHRC) extends its condolences to the Abbas family for the tragic loss and death of Attorney Issam Abbas, his wife Dr Rima Abbas and their three young children due to a fatal car accident that took place yesterday (Sunday- Jan. 5, 2019) on the I-75 highway in the state of Kentucky as they were on their way back to Michigan from Florida.

The loss of Issam, Dr. Rima and their three precious children is a tragic loss to the whole community," said Dr Saleh Muslah, AHRC Board President.

"No words can express the grief, pain and sorrow this tragedy has caused," said Mr. Imad Hamad, AHRC Executive Director. "The community is united in its grief," added Hamad. "We send our heartfelt condolences to the Abbas family," concluded Hamad.

For more information regarding visitation, funeral and burial services, call the Islamic Center of America in Dearborn at: 313-5930000