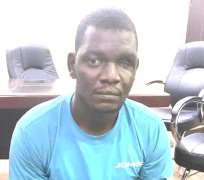 A top commander of the Boko Haram Sect, Umar Abdulmalik, who was arrested penultimate Thursday by operatives of the Inspector General of Police Special Intelligence Response Team, IRT Led By DCP Abba Kyari, in Lagos State, for carrying out several bombings, bank robberies and killings within the Federal Capital Territory, FCT, Abuja, Owo, Ondo State and Lokoja Kogi State, has revealed how he joined the sect and led members to carry out these attacks.

The 30-year-old suspect, who is a native of Okene in Kogi State and was alleged to have killed over 200 persons before his arrest told Vanguard that a radical Islamic cleric, who he identified as Mallam Mustapha indoctrinated him into the deadly sect. He explained that Mallam Mustapha came into Okene with his teachings, built a mosque in 2009 and urged residents to shun western education as it was a sin against Allah, and urged them to accept Islamic education which he said was the only education accepted by Allah.

He added that he attended several of Mallam Mustapha’s teachings, who he said also urged his followers to disregard the Nigeria State and wage war against her as her system of government was not in line with the dictates of Allah, which he said, ought to be in an Islamic fashion. Abudulmalik, further explained that he joined some of Mallam Mustapha’s followers in destroying their school certificates and he accepted to wage war against the Nigeria State.

We robbed banks to sustain the jihad “I joined one of the Boko Haram cells in Okene headed by one Zeeidi and we carried out several bombings within Kaduna, Kano and Abuja. Zeeidi was the person providing the bombs and my job then was to take them to our target locations. After a while, the Department of State Security infiltrated our cell and they started arresting members of our group. Mallam Mustapha was arrested and his mosque was demolished. Zeedi brought the idea of bank robbery so that those of us who have not been arrested could have resources to continue with the jihad. He brought some guns and he suggested we should attack the Kotonkarfe Prison in Kogi State, so we could free our members who were detained there.

The attack on the prison was successful and we freed a lot of our members, after which we attacked some banks in Okene and took all the money we could find there. “We then moved to Owo where we robbed some of the banks with dynamites and carted away large sums of money. We used some of the money we made from those robberies to buy high explosives including materials we could use in producing non-metallic bombs that could beat metal detectors. A lot of our members including Zeedi were arrested after those bank robberies and the attack on prison. I moved to Abuja with the bombs we produced and I formed a new cell in 2014. We carried out several bombings in the Fedeal Capital territory including those at Banex Plaza, Nyanya and Kuje areas of Abuja. Unfortunately our gang was busted and five of our gang members were arrested while our bombs, including the non-metallic and the materials we were using in making them were recovered in Gaulaka area of Niger State by the Police IRT Team.

I escaped, fled to Kano and I went underground for two years before I returned to Abuja and formed a new gang and we went into full blown armed robbery.” Meanwhile, Police source disclosed that five months after the operatives of the IRT, led by Deputy Commissioner of Police, Abba Kyari, launched investigations into the gruesome killing of seven policemen and a civilian, in July 2018 at a police post on the Galadima Roundabout, Abuja, they made a breakthrough when they arrested a member of the gang identified as Lukman Abdulmalik alias Lampard, through a tip off in Ondo State and he confessed taking part in the killing of the seven policemen. He went on to identify Umar Abudlmalik, as the leader of his gang, who he said instructed them to always kill policemen whenever they had opportunity and take their rifles.

The police source disclosed further that the suspect took the IRT operatives to their hideout in Abuja and four of his gang members identified as Abubakar Bello Sidi, Yusuf Abdulazeez alias, Fine Boy, Suleman Zakariya and Haruna Lamid, were arrested but, Umar Abdulmalik, escaped with a bullet wound. Four AK-47 rifles belonging to the deceased policemen, six magazines, 270 rounds of AK-47 ammunition and two police walkie talkie radios belonging to the deceased policemen were recovered from the suspects. It was gathered that Abdulmalik ran to Lagos with his bullet wound to the home of his younger sister who was a nurse and he started receiving treatments on his bullet wound. Unknown to him, IRT operatives in Lagos had information that he had a sister who was residing in Lagos, they trailed him to her house, found him sleeping there and apprehended him.

My robbery exploits — Abdulmalik Narrating his robbery exploits Abdulmalik said; “After I formed my new robbery gang, we robbed a woman of N500,000, which was the money she got from contribution she had with some women. One of our gang members who got information about the money told me about it and we robbed the woman and took the money. We also robbed a man at Okene checking point, we pretended to be policemen and collected N1.3million from the man. We then moved to Abuja where we robbed super markets including their customers. We killed a policeman at Shoprite area in Lugbe and took away his rifle. We also robbed a shop along Second Gate on the Abuja-Kaduna Road.

There was this dismissed policeman known as Apin-Iron, who was dismissed for taking part in armed robbery. Iron has two Ak-47 and a pistol which he normally used to intercept and seize illicit drugs from people trying to smuggle them into Abuja. We normally visited his place to buy the drugs and we became friends. In one of our visits he told us that he knew several rich people we could rob and all we needed to do was to give him his share of the loot. He gave us information of a man from whom we took N5million and we gave our contact N2.5m as his share because that was what he demanded. He also gave us several other jobs before I had an accident and damaged one of my eyes when coming from Niger Prison Breaking Operation.

There was one Mustapha who was an internet fraudster, he was making money, but he started having issues with some cultists in his area so he brought in the police to arrest the boys. But the boys were later released and came back to harass him. So, he came to me and requested for my boys to protect him and I told him he would have to buy my boys two Ak-47 rifles. He agreed and bought us the guns. Then, my boys, Lampard and Abubakar, started moving around with him in military uniforms. People who saw them would think they were genuine soldiers. So, he wanted my boys to kill the cultists as well as the nurse who was treating him because the nurse entered his house and saw him performing rituals and he didn’t want the woman to tell people that he was using charms to make his money. My boys told me about the job and I asked them not to kill anyone, then he became angry with me. I suspect he was the person who went to inform the police about my gang.

“After I lost my eyes I was admitted in the hospital but my boys were still going for robberies and would bring money to me after each robbery. I am the gang leader but I wasn’t with them when they killed the seven policemen at Galadima roundabout, I was in the hospital. After I was discharged, I had not gone for any robbery operation with them except Petrol Station robbery where we killed One person but IRT police team later arrested Lampard and Abubakar and they brought the policemen to my house.

I had an Ak-47 rifle with me when the police came and I fired some shots which made it easy for me to escape but the police returned fire and I got injured. I managed to escape to Iyana Sango Ota, Ogun State, where my sister was residing. I later learned that the police went on to arrest Fine-Boy and Abubakar and Suleiman, a guy known as scorpion called and informed me. I don’t know how the police knew I was in my sister’s place, they found me sleeping and I was arrested.” he narrated