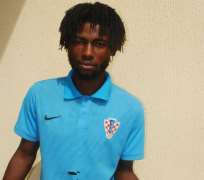 A notorious cultist in Osogbo, Osun State, Alade Afeez popularly known as Esubiyi who has been terrorising the ancient city has been arrested by the police.

The suspect was paraded by Police today along with one of the members of his cult group, Adesoji Seyi popularly known as Oosa.

The Commissioner of Police in the state, Mr. Fimihan Adeoye told The Nigerian Voice that the suspects had killed many innocent people in Osogbo.

Esubiyi said , he killed one Bode and that he also shot another person but the person did not die. He confessed that he is a member of Eye cult group.

"I have a gun shot in my body. They have tried to kill me before I joined the group. But God saved me. I made a mistake because I supposed to forgive but I did not forgive.

Esubiyi told The Nigerian Voice that he joined the Eye cult group in 2009 at Osun State Polytechnic, Iree, where he studied Accountancy at Ordinary National Diploma.