Irona, 2019 and Issues-Based Campaigns in Imo 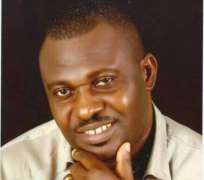 Last week, former member of the House of Representatives and Deputy Governorship candidate of the Peoples Democratic Party (PDP) in Imo State, Rt. Hon. Gerald Alphonsus Irona raised the bar, with a new level of political campaign, based on issues.

Speaking during an interactive session with media practitioners in Imo, Irona moved far away from the everyday rhetoric of political promises to critical issues on how to rebuild Imo State, as captured in the Ihedioha/Irona development plan. Of all that ex lawmaker said, some of the areas that really touched me are those that address transparency and accountability issues in governance; where he hammered on the need to open up government for effective citizens’ participation.

The issue of opening up the government for improved accountability and citizens participation is very critical at this point, because, one of the basic things lacking in the present administration in Imo is accountability, which has led to large scale corruption in public service.

According to Irona, the PDP governorship candidate in the state, Rt. Hon. Emeka Ihedioha is committed to running a transparent and participatory government. He outlined some of the practical steps they hope to take in realizing this, particularly, in putting in place, legal frameworks to prevent corruption and abuse of public offices.

As Chairman, Freedom of Information Coalition, Nigeria-FOICN and an anti-corruption crusader, one will naturally expect that I will support candidates that are committed to the implementation of the Freedom of Information Act and other transparency initiatives. This is true and that is where we are. As much as I know that the FOI Act is applicable to all levels of government (Federal, State and Local Government) and all arms of government, its adoption by states will show further commitment to its implementation. Hon Irona posing with Imo Journalists after the meeting in Oguta

I had earlier received assurances to the effect that Ihedioha and Irona are interested in having state versions of the Freedom of Information and Public Procurement Acts, as further commitment to implementing transparency initiatives in the state, if elected in 2019. Last weekend, the Deputy Governorship candidate, Hon. Gerald Irona said same to the hearing of over thirty media practitioners in Imo, whom he invited for a parley in his home town - Oguta. Considering the fact that the duo of- Ihedioha and Irona have no cases of corruption on their neck, coupled with the fact that none of them has a history of deceit, I believe him (Irona). For the avoidance of doubt, hear Irona:

“I have invited you to urge you to buy into our project, which is to rebuild Imo. Our overall objective is to entrench good governance in Imo State. You cannot have good governance without being accountable to the citizens that elected you. To have good governance, there is need for participatory media. For transparency and accountability to exist, there must be freedom of Information. We have a deliberate policy in our manifesto to adopt the Freedom of Information (FOI) Act in Imo, in order to have transparency in governance. We will forward an Executive Bill to the Imo State House of Assembly to pass into law, the FOI Act, to enable us have a law that will empower citizens to access government held information in order to hold the government accountable and participate in governance.”

“It is our opinion that for there to be accountability in governance, there must also be due process in public procurement. To that effect, we will ensure that the Public Procurement Act, as passed by the National Assembly and assented to by the President, is replicated here in Imo. It is our candid opinion that if we have an FOI law and a Public Procurement law in Imo state, there will be transparency, accountability and due process (in doing government business) and when vigorously implemented, shall lay a solid foundation for the good governance we have been yearning for in Imo State.”

“The PDP Governorship candidate, Rt. Hon. Emeka Ihedioha, yesterday, unveiled the manifesto of the party and our focus shall be good governance, rule of law, qualitative education at all levels, with special interest in technical and finishing education; tourism, agriculture, health and infrastructural development.” “To ensure that we are held accountable, we shall introduce periodic citizens’ dialogue - an interface between the government and the citizens, particularly, the media, community-based organizations, professional organizations, faith-based organizations and all other non-state actors (civil society). The forum shall be used to explain government policies, plans, decisions, programmes and activities to the citizens, with a view to getting feedback- their buy-in, suggestions, advice and involvement at every stage of the governance process. Ours shall be an inclusive and participatory government. Ours shall be a government built on trust and the fear of God.”

No doubt, it takes special courage, determination and commitment to agree to empower citizens to hold the government accountable. To have laws like the FOI and Public Procurement Act in place is indeed, the way to go. Studies have shown that most developed nations of the world anchored their development on access to information. Having a government that is committed to an FOI law means that a solid foundation for genuine development is being laid.

Again, most corrupt practices in public service take place through the procurement process. Having a law that clearly guides public procurement is another great feat that will help place Imo on the path of recovery, introduce sanity in public service and ensure that the people’s funds are utilized in a transparent manner to guarantee rapid development. This, no doubt, is the way to go.

While I await the submissions of other political actors in Imo State, the PDP team has raised the bar, with very critical developmental and transparency issues. Other political parties can only make serious impacts, if their campaigns are based on issues, with focus on not just what they plan to do, but how they plan to realize them.

The proposed periodic citizens’ dialogue is another great initiative that will help create platforms for effective engagement with citizens on government policies, programmes and activities.

For the Ihedioha/Irona camp, they have taken off on a good note. Next is to see to the training of Civil Society actors in Imo on the provisions and application of the Freedom of Information Act, as well as the Public Procurement Act. Joining the Open Government Partnership will also not be a bad idea.

Ultimately, governance is about the people. Whatever any government does without involving the people will hardly make any serious difference. Engaging the people regularly will ensure that developmental projects address the needs of the people. With that, stakeholders will see it as their obligation to protect government property and get involved in the actual business of governance.

Imo people must resist criminal elements that will come to buy their votes with peanuts and food items. Remember, if you sell your votes for peanuts, you will suffer for four years or more, but, if you endure for few more weeks, you enjoy for the next four years and more.

With this development, civil society actors and citizens generally must use FOI state-level adoption and implementation as an advocacy issue to engage those seeking political offices, particularly, those wanting to be Governors in Imo and beyond.

For 2019, only issues-based campaigns shall fly. Let’s interrogate them NOW!