Eco Bank In Alleged Forgery And Cloning Of Documents Scandal 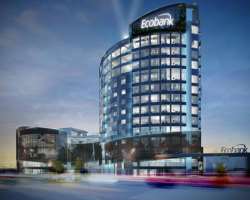 Mr. Linus Ukachukwu, a businessman has accused Ecobank of forging documents to open an account for his company, Lingo Nigeria Limited, without his consent.

But the spokesman of the bank, Mr. Austine Osokpor, has dismissed the claims. Instead, the bank is claiming that the said businessman is “frustrated and peddling falsehood against it.”

Briefing newsman in Abuja, the businessman said the account opened in the name of his company was used to draw dividends for N50 million worth of shares he bought from Diamond Bank in 2004.

Ukachukwu said, “It is very unfortunate that banks no longer for the real business now, but chroming.

“We bought N50 million shares from Diamond Bank in 2004 and since then we had not collected any dividends.

“Upon further enquiry, we discovered that the payments had not been made into our accounts, we approached the Bank for the payment but they were dribbling us.

“Finally we went to court to challenge the matter, during the process, the Bank came with documents in their defense.

“Unfortunately for the bank, all the documents they presented were forged and cloned.

“Presently we have reported them to the EFCC and to the police for forgery.

“The dividends we are expecting is above what we invested, about N120 million Naira. We want Eco Bank to pay us those dividends and pay N1 billion damages for forging our documents.”

Ukachukwu claimed that the case has been filed at the Lagos High Court.

According to the petition to the EFCC and the Police, by his solicitors, Felix Dumebi and Company, the documents for the account opening for Lingo Nigeria Limited, were all fake.

The petitions were dated December 7, 2018 and received at the Office of the Inspector General of Police as well as the Acting Chairman of the Economic and Financial Crimes Commission (EFCC), Ibrahim Magu.

Some of the documents listed to have been forged include: Certificate of Incorporation, Memorandum and Articles of Association, the CEO Linus Ukachukwu’s International Passport and signature, as well as Drivers’ License of the director of the company.

The petition also alleged that the bank also had in its possession a forged BVN Verification Page of the CEO, alleging that all the forged documents differed from the original.

“In the light of the foregoing, it becomes expedient to write requesting you, sir, to thoroughly investigate a case of conspiracy, forgery, financial crime, criminal mis-appropriation and fraud against the management of Ecobank Plc.,” it read.

Speaking to Daily Sun, the bank’s spokesman, Osokpor, said the legal department of the financial institution will be briefed as soon as work resumes and that an appropriate response will be provided.

He said the businessman has no case against the bank and described him as “fraudulent.” He insisted that if he had a serious case, he ought not to have been looking for media publicity.

“Our legal department will look at the issue and respond adequately. The man is a fraudulent person. Why is he moving from one media house to another if his case is genuine? Let him him do the right thing. We will respond adequately,” he added