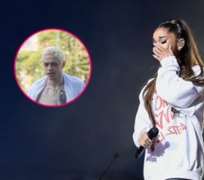 “I'm downstairs and I'm not going anywhere if you need anyone or anything,” she tweeted to the star, who has reportedly showed up for work today at the Saturday Night Live studios in New York City. “I know u have everyone u need and that's not me,  but i'm here too Opens a New Window. .”

Grande's now-deleted tweets to her ex, who she broke off her engagement with in October, comes on the heels of Davidson, 25,  posting on Instagram that he didn't “want to be on this Earth anymore.” Opens a New Window.

“I'm doing my best to stay here for you but I actually don't know how much longer I can last,” he wrote. “All I've ever tried to do was help people. Just remember I told you so.”

“All of this foolishness weighed on my mental health so @ArianaGrande you know I got love for you but until you're ready to really make sure everyone's ok don't use me or this moment to promote a song,” West clapped back.

“Bravo Kanye West for  standing up for yourself and speaking out against mental health Opens a New Window. ,” Davidson responded. “I can't explain to you enough how difficult and scary it is to be honest about stuff like this.”

Grande seemed genuinely contrite after getting caught up with West and Davidson's issues.

“Man i'm so sorry i told a dumb joke,” she tweeted when rushing to show Davidson she was there for him. “i really didn't mean any harm. all i want everyone to be healthy and happy. so desperately. please. my god.”

“Let in the help that will become available,” she posted on social media. “I'm praying for you Pete. I've been there. It gets better.”