Defending your rights is not hate speech: Oyedepo 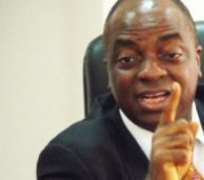 The President and Founder of the Living Faith Church Worldwide, also known as Winners Chapel, Bishop David Oyedepo, has said that speaking out against oppression and injustice should not be classified as hate speech.

Oyedepo said this at Faith Tabernacle, Ota, Ogun State on Saturday, while delivering his sermon during the impartation service of the 20th Shiloh, which is the annual gathering of members of the church

However, Oyedepo did not mention President Muhammadu Buhari nor the Federal Government during the sermon, but he stressed that speaking out against oppression and injustice done to one could not be justifiably classified as hate speech in any way.

He said, “Somebody is stepping on your toes and you ask him to take away his leg, and they call it hate speech.  Is that a hate speech? Is it a love speech? It is self-esteem speech. When you carry the Spirit of Dominion, you don't beg.”

The preacher said he had never had an occasion to withdraw any of the messages he had preached in the past 37 years, saying he was an ambassador of God that enjoyed full supernatural backing.

Explaining the ambassadorial status of Christians further,  Oyedepo said that if anybody in this country carried a complimentary card of the President, the card would grant such a person access to many places, how much more Christians, who had the divine authority to dominate in all areas of life.

He stated that most of the best universities in the world were founded by the Church, citing Oxford and Cambridge universities as examples of institutions that had been in existence for more than one thousand years.

The preacher added that the Covenant University had gone far ahead of many government-owned institutions that had been in existence long before it was established.