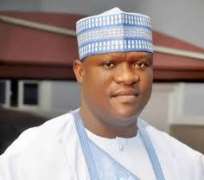 Danladi, a former Acting Governor of Taraba, is facing a two-count charge of conspiracy and violation of financial regulations preferred against him and two others Sen. Joel Ikenya and Mark Useni accused of collecting the sum of N450 million from the former National Security Adviser Col. Sambo Dasuki‎ to prosecute the 2015 election in the state.‎

The PDP youth group in a statement signed by its Coordinator, Mallam Uthman Abdullahi said the APC candidate is deliberately avoiding and frustrating his corruption trial because of his closeness with the Villa and EFCC chairman, casting aspersions on the ongoing anti corruption of the federal government.‎

Uthman mocked the EFCC for remanding a former governor of Kebbi State Usman Dakingari and three others over same offense, but allowed Danladi to be walking freely because he belongs to the ruling party.

‎"the EFCC should tell the whole world why its shielding Sani ‎Abubakar Danladi and give reasons they could not present him in court for trail, when the anti corruption agency is keeping the former NSA Sambo Dasuki, former Kebbi Governor Dakingari and others in custody for same offence.

The group averred that i‎nsaner clime the ruling APC would have handed over Danladi to the police and EFCC to prove its commitment to its war against corruption rather than shielding him from trail.

The group expressed surprises at “Danladi who told EFCC interrogators that he chaired the 8- man committee that disbursed the money for Taraba State, and admitted that he and the other members of the committee shared N36 million among themselves while the balance of N414 million was distributed to other stakeholders across the 16 local government areas of the state and one Development Area Council, now suddenly decided to shun trail in the case because of federal might."

The group said Danladi‎ has been in Abuja lobbying from office of the Vice President, to the Chairman of EFCC and other cabinet members to ensure he does not face his ongoing corruption trial until after elections.

"Few days to his case last Wednesday, the APC candidate was pictured in a meeting with the Vice President Yemi Oshibajo, since then Danladi has been boasting to anyone who cares to listen that he wont appear in court for trial and he won't be arrested."

The group said President Buhari must raise and fight corruption beginning with his party members.

" President Buhari must take a stand now, if he will sacrifice his integrity and war on anti corruption on the alter of political partisanship infavour of Sani Danladi."

The group urges the EFCC to immediately arrest Sani Danladi because it has uncover plans by the APC candidate to leave the country few days to the next adjournment of the case.

The group berated the APC, a party fighting corruption for nominating a candidate with baggage of corrupt cases.

"Although its none of the PDP business who emerges APC candidate in Taraba state but for posterity stake, the APC and President Buhari should borrow wisdom from the PDP on handling candidates with corrupt baggage.

"In 2007 when the then governorship candidate of the PDP Dalandi Biado was enmeshed in corruption controversies, the PDP under former President Olusegun Obasanjo showed statesmanship and withdraw Biado's candidacy for the Late Governor Danbaba Suntai, it's totally shameful that with all the APC anti corruption propaganda, some one on corruption trial would controversially emerged his candidate in Taraba state."