Over 50,000 Nigerian, 277 foreigners working in construction sites across the country: Fashola 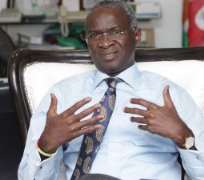 More than 50,000 Nigerians are now engaged in 77 works and 50 housing construction sites across the country, the Minister of Works, Power and Housing, Mr. Babajide Raji Fashola has said.

The minister said further that  only 277 foreigners were involved in those sites.

These  figures, Fashola said, are contained in the 'Inception Report' the  Ministry of Works, Power and Housing recently commissioned to 'ascertain the number of foreigners employed on those sites and whether they have work permits for the work they  are undertaking'.

Mr Fashola, who won the NIDA 2018 ' Icon of National Infrastructure Development ” Award, was represented at the occasion by Engr Funsho Adebiyi Director of Highways South West

The Minister explained that 'while Government welcomes foreigners and investors, we expect that like in all law abiding countries, foreigners can only work after obtaining work permit'

He explained further that while Nigeria took loans from overseas to execute some projects, 'we did not sign away the rights of Nigerians to benefits from such projects'.

The Chairman of the occasion of the occasion, Otunba Senator Olabiyi Durojaiye who commended the organizers of NIDA Awards said in his speech that  infrastructure development of Nigeria is very critical and an issue that should be of concern to all stating that 'no nation develops above the level of infrastructural resources available to her.

He also called for vibrant private and public sector players to partner in driving infrastructural revolution in order to fast track development on the country.

'We need more public budget investments, foreign capital and creative funding avenues to achieve this goal speedily as we cannot afford to be observers. As an emerging economy with growing population, we have to take the need to improve on our various infrastructure very seriously' he added.

In his welcome remarks, the Chairman, Nigerian Infrastructural Awards (NIDA) and Managing Director of Prospers Strategy Limited, Mr Lanre Alabi, said  the issue of Infrastructure is very vital to national development as the state of infrastructure is a key determinant to gauge the health of nation.

Mr Alabi explained that ''NIDA was established to honor corporate organisations, government agencies and individuals who have made huge and outstanding impact in the Nigerian infrastructural development sector over the years.

He added that with the debut of the first Nigerian Infrastructural Development focused magazine, a public platform to raise the bar on infrastructural awareness has been created. 'The publication offers a credible avenue for both the public and private sector players to share ideas and to imbibe best practices that have helped other economies on infrastructure development'.