Re: Governor Okorocha Glorying In Impunity 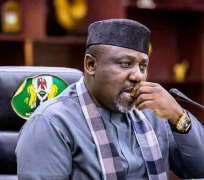 While the dust of embarrassment raised by protocol breach of Governor Rochas Okorocha during the solemn Christian ritual of communing with God over the painful exit of the revered mother of Senator Osita Izunaso, Ezinne Florence Izunaso, in Ohakpu, Oru West local government area of Imo State last Saturday, Governor Rochas Okorocha , in his tradition, did not disappoint us by his contemptuous response.

It is foolhardy to read Chief Okorocha’s diversionary preposterous reason he could not recognize the incumbent Deputy Governor of Imo State, Prince Eze Madumere through Sam Onwuemeodo, claiming he appealed the historic judgment of Imo High Court on September 25, 2018 presided by Hon. Justice Benjamin Iheka, where the purported impeachment of Prince Madumere was declared null, void and of no effect.

Governor Okorocha’s reason adduced for choosing not to recognize the Deputy Governor shows a seeming incorrigible Governor who has chosen to continually wallow in absurdity, with all the retinue of advisers both in legal profession and other areas at his disposal. Right question would be; is it that the blade is not sharp or the barber does not know how to use these very sharp blades for the serious business of government?

Another vexatious and contemptuous issue is the claim by Governor Okorocha that he appealed the Deputy Governor’s victory at the court of competent jurisdiction. This is nonetheless another flip side of disgraceful administrative architecture of Okorocha’s regime. That a State like Imo peopled with the intellectuals and egg heads to be wallowing in the wilderness of crass ignorance despite the employment of an Attorney General, to say the least, is disdainful. The truth is that such alleged appeal may not even be in existence.

May we remind Okorocha and his court jester called Onwuemeodo that the court judgment that nullified Prince Madumere’s purported impeachment was declaratory with a restraining perpetual injunction against the emergence or reference to any third party as being the position of the Deputy Governor. More so, Prince Madumere is an elected officer of the government and not Okorocha’s appointee and therefore the office shan’t be left void and never has ever been so.

We also state that there is no such thing as Deputy Governor designate since it is not recognized by Nigerian constitution or the extant laws of the land. This abnormality also calls to question the educational background of those managing Chief Okorocha or could it be that they are only using this disgraceful tactics to fleece him of the State’s common wealth.

Without mincing words, His Excellency, the Deputy Governor of Imo State, Prince Eze Madumere regrets ever toiling to invest so much in his friend, Okorocha saying he has not seen such egocentric, greedy, nepotistic and most primitive power drunkenness at play just like Okorocha has demonstrated.

This is the reason he resolved to liberate Imo from such rudderlessness. Imo people are proud of Prince Madumere and posterity will remember him well. Prince Madumere is a man of integrity with untainted strength of character. Chief Okorocha should also understand that Prince Madumere opted out for the deputy governorship slot so as to give other people a chance. He never presented any family member or any of his cronies but left the decision in the hand of others because he is not selfish and would not want to mortgage the future of the State over selfish desire. It is also on record that as the then Chief of Staff, Government House, Prince Madumere refused the appointment of his elder brother as the Chairman, Civil Service Commission, condemning it, since Government is no family business.

Back to the issue, it was infantile for anyone to think that such occasion with the gathering of the cream of leaders including high powered members of the diplomatic corps was as mind boggling as it was brazenly embarrassing.

However, the Deputy Governor of Imo State, Prince Eze Madumere understands Okorocha’s predicament, frustration and the root of his ludicrous outburst and does not feel offended but feels for Governor Okorocha’s unfortunate state.

Meanwhile, it will go down in history that Chief Okorocha will stand as the first Governor with over one thousand suits hanging on him for all the wrong reasons even as court verdicts are treated as mere jokes.