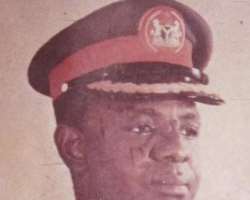 As the family, relations, friends and well wishers of late General Abba Kyari hold his third and seventh day funeral prayers simultaneously today Wednesday in Maiduguri at the residence of late General Abba Kyari located along GRA road Maiduguri near APC State Secretariat amidst mammoth crowd that converged to register their presence at the occasion from far and near.

Prayers were administered by Chief Imams from various places led by the Imam Idaini of Borno organized by one of the sons , Senator Abu Kyari , a serving senator and Chairman, Senate Committee on Defence.

Meanwhile, President Buhari has in a statement expressed sadness over the demise of a retired Nigerian Army Brigadier General Abba Kyari

He condoled with the government and people of Kaduna, Katsina and Borno states over the demise of the elder statesman.

The president, however, prayed to God to grant fortitude to the family and friends he left behind to bear the loss.

President Buhari’s condolence message was contained in a statement issued Sunday by his Senior Special Assistant on Media and Publicity, Malam Garba Shehu, in Abuja.

The president also condoled with the government and people of Kaduna, Katsina and Borno states over the demise of the elder statesman.