Another Attempt By Desperate Sen. Magnus Abe To "crown" Himself Governor Foiled 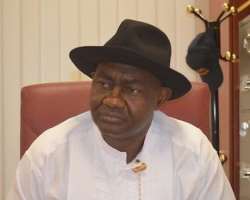 Today, Wednesday November 15, 2018, a suit dated 8th November and filed 9thNovember in which a grievously desperate attempt by Senator Magnus Abe and his co-travellers to reap from where they did not sow hit the rock as a Federal High Court sitting in Port Harcourt turned down the originating summons filed by them seeking the High Court to declare them rightful candidates of the APC in Rivers State. They also sought an Order of the Court to compel the Independent National Electoral Commission (INEC) to accept and publish their names as candidates of the All Progressives Congress, APC, for Rivers State.

Consequently, the court ordered that the Respondents be put on notice. Case was adjourned to the 20th of November, 2018 for the hearing of the motion for accelerated hearing.

It would be recalled that somehow Rivers APC lawyers had been tipped off of what was supposed to be a secretly filed matter expected to be heard ex parte and Order handed down to deal a surprise sucker punch to the APC by the renegade faction led by Sen. Magnus Abe. The unexpected appearance of the APC Counsel in court averted the plot. Consequently, the desperate plans by Sen. Magnus Abe and his cohorts now lay in ruins. It was planned such that INEC would have been compelled to use them to replace authentic candidates already accepted and published for the 2019 elections.