As The Verbal War Intensifies, Gov Rochas Okorocha Declares" "Oshiomhole Is The Father Of Familiocracy" 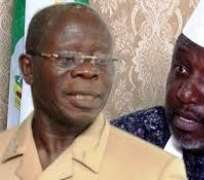 The national chairman had at the weekend explained that the governor, along with three others, had been offended by his refusal to do their biddings, specifically saying Okorocha was particularly angry because he had refused to assist him to establish a political dynasty in Imo State.

But Okorocha reacted to this charge of nepotism in a statement by his Chief Press Secretary, Mr. Sam Onwuemeodo, and said it was Oshiomhole that was the “father of nepotism,” accusing him of promoting his relations into several political offices in Edo State.

“To say the least, Adams Oshiomhole is the “father – father” of family dynasty or nepotism or “familiocracy,” he said, refuting the allegation that he was sponsoring his family members to take over Imo State.

He explained that the only relation he had in government was Mrs. Ogechi Ololo from Owerri North.

“There is no other direct or indirect relation of Okorocha in his government. So, as it stands now, Rochas is the only Okorocha running election,” he explained.

“But Oshiomhole is the known family dynasty builder. And Edo State is the victim. In fact, he is the architect of “familiocracy”. Oshiomhole is the National Chairman of APC and governor for eight years. Rilwan Oshiomhole, his younger brother, is a Commissioner in Edo State Oil Producing Development Commission (EDSOPEDEC).

“With all these, between Rochas Okorocha whose only relation in government is Ogechi Ololo from Owerri North and Adams Oshiomhole who has the Oshiomholes in government or contesting positions, who should be accused of building a dynasty or running a “familiocracy”?

Okorocha insisted that Nwosu won the Imo State governorship ticket of the party fair and square, and accused Oshiomhole of manipulating the process to produce a different outcome.