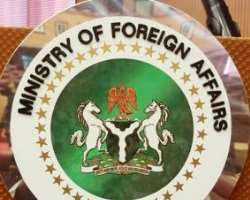 Lagos, Monday, November 12, 2018: The Ministry of Foreign Affairs today became the latest entrant into the Freedom of Information (FOI) “Hall of Shame” as it was adjudged to have consistently breached most of its duties and obligations under the FOI Act over the last seven years.

Ms. Chioma Nwaodike, Legal Officer at Media Rights Agenda (MRA), announced the induction of the Ministry into the FOI Hall of Shame in a statement in Lagos, saying the institution had essentially ignored its responsibilities under the FOI Act for most of the past seven years in circumstances that amount go gross dereliction of duty.

The Ministry is a statutory body created as part of the Executive branch of the Federal Government to reinforce foreign decision making and implementation processes in Nigeria and handle the external promotion of Nigeria's domestic vision and ideals. In recent times, the Ministry has also been saddled with the responsibility of increasing international awareness about Nigeria's economic potential.

The Ministry oversees the operations of all Nigeria’s embassies, consular offices and other foreign missions all over the world. The embassies under its charge in all countries where Nigeria has a diplomatic presence would most likely be the point of contact for Nigerians and non-Nigerians in those countries seeking information under the FOI Act.

Ms. Nwaodike stressed that the Ministry has failed to comply with its proactive publication obligations under Section 2 of the Act, which requires all public institutions covered by the Act to publish and periodically update certain categories of information, including on its website. She observed that the Ministry’s website does not contain the categories of information that it is required to publish proactively.

In addition, she said, the ministry has failed to comply with the express provisions of Section 13 of the FOI Act, which mandates the institution to organize training for its staff and officials to sensitize them on the public’s right of access to information and records held by it and to enable the institution’s officials to effectively implement the Act. She noted that there was no indication that the Ministry had conducted such training for its personnel and officials over the last seven years since the Act has been in existence.

Ms. Nwaodike noted that from the website of the Ministry, it is clear that it is also in breach of the requirement of Section 2(3) (f) of the Act for it to proactively publish the title and address of the appropriate officer to whom applications for information under the Act should be made by members of the public, adding that this stipulation is also contained in the Implementation Guidelines for the FOI Act issued by the Attorney-General of the Federation to assist all public institutions in their implementation of the Act.

According to her, from the records available from the Office of the Attorney-General of the Federation, since the FOI Act was enacted in 2011, the Ministry has only submitted its annual report on its implementation of the FOI Act to the Attorney-General of the Federation once - in 2013, when it should have submitted a total of seven such reports as at February 1, 2018. She said there was no record of the Ministry having submitted any report for any other year.

She described as “unfortunate the fact that the Federal Government ministry responsible for the external promotion of Nigeria's domestic vision and ideals and charged with boosting international awareness about all aspects of Nigeria, including its economic potential and the business opportunities available in the country, and which is likely to be the first point of contact for most foreigners from all parts of the world seeking information about Nigeria, has not instituted mechanisms for responding to information requests from Nigerians and non-Nigerians alike, despite the express provision of the FOI Act, which imposes an obligation on it to do so.”

Ms. Nwaodike insisted that the failure of the Ministry to effectively implement the FOI Act and to put mechanisms in place to enable persons within and outside Nigeria seeking information under the Act to effortlessly apply for and obtain such information amounted to gross dereliction of duty as the provision of such information forms part of the primary reasons for the existence of the Ministry.

Media Rights Agenda launched the FOI Hall of Shame in July 2017 to draw attention to public officials and institutions that are undermining the effectiveness of the FOI Act through their actions or inactions, decisions or utterances.