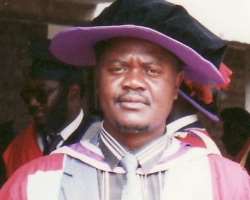 On 6th October, I wrote a short message to Professor Chris Wanjala, I wanted to share with him some news about the Egyptian Marxist and political economist Samir Amin who had died in early August 2018.Unfortunately, Chris Wanjala did not have the information about the death of Samir Amin, he replied to my message, fully expressing his grieve. In his message he also wondered why the media in East Africa could not run news stories about death of such a prominent intellectual, scholar, patriot and social revolutionary like Samir Amin. This was my fourth time I was communicating with Professor Chris Wanjala in the year 2018.

At the beginning of 2018, in fact on 20thJanuary, I called Chris Wanjala to get his sentiments aboutSouth African poet Keorapetse Kgositsile who had just died by then. Chris Wanjala talked on phone for two hours about the peculiar strength, intellectual alertness, academic focus, cultural confidence and intellectual empathy as the key qualities of Keorapetse. Professor Chris Wanjala was very specific in declaring Keorapetse as a good man and a caring scholar for the critical role Keorapetse played in assisting NgugiwaThiong’o to run away to Zimbabwe and then use the Zimbabwean passport to go to exile in United Sates of America. This was the time the government of Kenya under the visceral dictatorship of Daniel Moi had instructed the special branch police to arrest and detain NgugiwaThiong’o at the Nyayo torture chambers for writing the books that were intellectually liberal. My conversation with Professor Chris Wanjala about Keorapetse that particular evening inspired me to write an article about the unique literary and intellectual spirit ofKeorapetseKgositsile, the article was published as the main letter in the Sunday Nationat Nairobi and as the leading opinion in the Face2face Africa inNewYork.

On one of the week-end days of May 2018, I visited Anna Nanjala catholic Library in Lodwar town to do some general reading, I first read Professor Wanjala’s brief review of Dreams in Time of WarbyNgugiwaThiong’o. Professor Wanjala had reviewed this memoir by Ngugi in AwaazMagazine.Thereon, again I picked the Mind and Styles of Okot P’Bitek in Song of Lawinoby Monica NaliakaWanambisi (aka Professor Monica Mwelesi). The introduction in this book was written by Chris Wanjala. It is one of the best introductions ever written in Africa. It comes out clearly on the problem of ‘Barbarous Pedantry’ disguising as literary criticism in Kenya.

It was so pataphorical on that day that Professor Chris Wanjala coincidently called me that same moment I was reading the introduction. I thought maybe he wasstanding somewhere in the reading hall looking at me with his small sharp eyes that often scintillated from small eye-balls in un-skewed geometry of his baby face that used to give him a hallmark of youthful appearance in contrast to the biological reality that Wanjala was an indisputable septuagenarian by the time I was reading theintroduction. I picked his call, he was happy and upbeat on phone. He quipped that he finds fun in calling me ‘Alexander’ because he also has a son by the same name, that he named him after Alex La Guma, the south African Marxist, novelist and the fearless anti-apartheid crusader. Professor Chris was talking about Dr. Alex Wanjala, the French Literature don at the University of Nairobi. Ijoked back to Professor Wanjala by teasing him to be open and declare if his son was fully named as Alex La Guma Wanjala or not. He went mirthful on phone; he broke into a long spell of deep-chested wheezing laughter after which he asked me where I was. I told him that I was in Lodwar at Anna Nanjala library reading his introduction to professor Mwelesi’s Mind and Style of Okot P’ Bitek in Song of Lawingo. I also praised professor Wanjala on phone for displaying high level of knowledge of British Literature in the same introduction. He became alert and careful on phone, then asked me if there are some of his other books on the shelves, I looked up and saw the Stand Points on African Literature, Drums of death, and then Memories We Lost. I confirmed to him on phone whatever of his books that was there on the shelves. He was happy with that, then he instructed me to send him an e-mail of over a hundred questions to be answered in his auto-biography he was planning to write. I did so on the same day.

In June, 2018. We exchanged with professor Wanjala some short messages on phone aboutTaban Lo Liyong’o and OkelloOculli.Wanjala was so passionate about Taban, he commended Taban for having displayed extra-normal ability in blending philosophy with poetry, Wanjala was of an idea that Taban is the most qualified African writer to be considered for the literature Nobel Prize. Two days later, professor Wanjala called me to inform methat he had finished looking at my manuscript of essays on African literature and thus I should travel to Nairobi so that we look for the publisher together. But Professor Wanjala told me that already he had two publishers in his mind; Naima Kassim at the East African Literature Bureau and Mellitus Wanyama at Utafiti Publishers. He told me that he held them in highesteem as the most preferred publishers for my Manuscript. However, Professor Wanjala had also asked me to write alessthan hundred pagesBiography ofthe late Pascal Nabwana before I go to Nairobi, so that I can take it along with me, so that can look for how the two manuscripts could bepublished at the same day. When I told professor Wanjala that I am not the right person to write Pascal Nabwana’s Biography, but instead Doctor Fred Makila,the author of Outline History of Babukusu is the right person. I told professor Wanjala that Dr. Makila is also a step son to Pascal Nabwana and hence he can do a good job in writing Pascal Nabwana’s Biography. Professor Wanjala dismissed my arguments in a very humorous way, he told me not to think about Dr.Makila for writing Nabwana’s biography because Dr. Makila abandoned reading, writing and running his Mukangu Bookshop at MisikhuTownship for busaa drinking and selling MadawayaKienyeji, herbal medicine. He told me that Benjamin Wegesa the author of Captured by the Raiders was a more responsible Bukusu writer and more intellectually honest than Dr. Makila.I agreed and then I started researching for the materials I am to use in writing the Biography of Pascal Nabwana.

On Monday 15th October 2018, Mr. Felix Sialo, a Journalism lecturer at Maasai Mara University, called me in the afternoon to inform me that the social media was alive with stories about Professor Chris Wanjala who had just passed on at Moi Teaching and referral Hospital in Eldoret during the early morning of the same day. It was so bad news for me. I mused within myself. Then the words of Herman Melville that,‘O death! O death! why are you ever untimely!’ rang loudly in my mind’s ear. Chris Wanjala’s death is a gap I may not fill easily.

The Chris Wanjala I knew was a suave Marxist, talented writer, passionate teacher, true and honestfriend, a practical feminist, a feasible protector of the maleness in a boy child, source of harmony between the snobbery in bourgeoisie culture in Kenyan universities and humility in poverty across Kenyan rural societies, and not only to commend him for having been an accomplished fountain of direction amid the intellectual turbulence that sometimes rocks the literature pools at the University of Nairobi with wild ripples. I mean Chris Wanjala was a true friend to African culture, a gifted oral historian, an intellectually militant but very forgiving scholar. But he has died, what else can one say in such trial-some moments? Nothing. There is no any other conclusion I can make, but as a Muslim, I have to accept the death of professor Chris Wanjala just the same way I am without any other choice but to accept the deaths of David Rubadiri, Kofi Annan, Musician Kimaru, Winnie Mandela and V S Naipaul by decrying 2018 as a doomsday year for African art, music, culture, political inquiry and literature.

Let me make a comment about Chesamisi village; Chesamisi village is a potpourri of the unspeakable, this is the village where Professor Chris Wanjala socialized last at funeral gathering before he went hometo die of acute pains in the stomach and in the chest. Chesamisi village is just like the meaning of its name is a tragic village, just like the villages that were overtaken by cultural crudeness in chapter ten ofAchebe’s Things Fall Apart where the egwugwu hovered here and there looking for the successful young men to kill. Chesamisi village is like the dangerously dirty Africa of the last century in whichRichard Wright, the black American writer and author of Racism Listen!Visited out of lovebut onlyto pick the infection of dysentery inreturn, this was the disease that tortured Wright and claimed his life in prime, it was the disease which to which Richard Wright succumbed some few days later.